Earlier this month, it came to light that the new high-tech U.S. $100 bill was so difficult to counterfeit that... 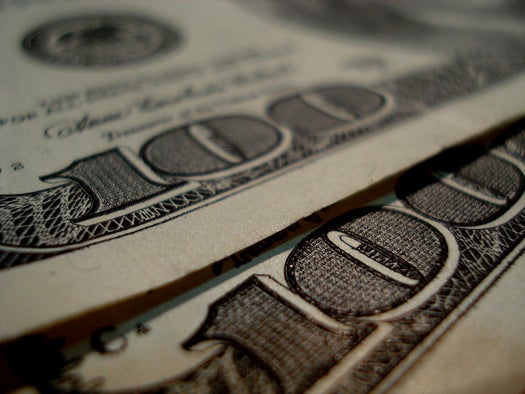 Earlier this month, it came to light that the new high-tech U.S. $100 bill was so difficult to counterfeit that even the U.S. mint couldn’t properly master the production process, causing printing problems that eventually led the Treasury Department to quarantine $110 billion in new currency. But rather than incorporating sophisticated printing tricks like 3-D security strips, watermarks, and color-shifting inks, a team of German and Japanese researchers have come up with an easier and potentially more effective way to secure banknotes: stamp tiny organic circuitry directly onto the bills.

Testing on U.S. dollars, Swiss francs, Japanese yen and Euros, the researchers essentially printed aluminum oxide, gold, and organic molecules right onto the notes to create layers of thin-film transistors (TFTs) right on the currency. Those TFT arrays need next to no power to operate – just 3 volts, which could be supplied from a wireless source. The team managed to get 100 organic, ultrathin TFTs onto each note, enough to perform simple computing tasks.

The team hasn’t quite yet worked out the anti-counterfeit part of the equation, but it’s not hard to see how future bills could be minted with tiny, flexible circuits printed right into them. A device similar to an RFID reader could both provide them with power and communicate with the circuits whenever they pass in close proximity, making it easier to both track and authenticate bills in circulation.