Wet, squishy quasi-liquid electronics could yield better implants that work with the wet, squishy environment of the human body, according... 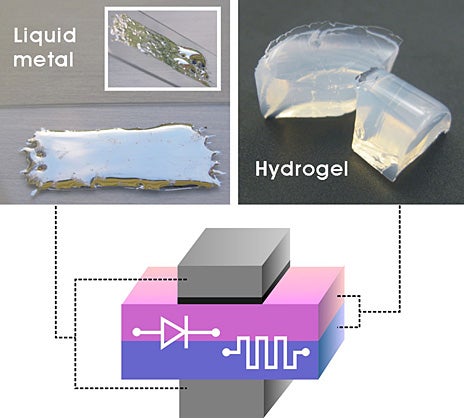 Hyung-Jun Koo and Ju-Hee So via IEEE Spectrum
SHARE

Wet, squishy quasi-liquid electronics could yield better implants that work with the wet, squishy environment of the human body, according to a new study.

A pair of grad students at North Carolina State University presented a paper last week describing a quasi-liquid diode whose electrodes are made of a gallium-indium alloy that is liquid at room temperature. Two hydrogel films are sandwiched between the electrodes — one is doped with an acid and the other holds an alkaline compound.

The interface between the electrodes develops a thin coating of gallium oxide, which creates resistance, as IEEE Spectrum explains. The electrode with the alkaline substance suppresses the formation of this skin. So, applying voltage changes the the thickness of this gallium oxide “skin” — negative voltage makes the oxide thinner, lowering the device’s resistance, and a positive voltage makes it thicker, producing greater resistance.

What’s more, the device retains a memory of its resistance state even after it is turned of, so it acts like a memristor, according to Ju-Hee So, a chemistry grad student who presented a paper on the device last week at the fall meeting of the Materials Research Society in Boston.

The same research lab has previously worked with gallium-indium alloys to build bendy antennae; it can bend and stretch but return to its original shape without breaking. This could make it more useful for future implants like artificial limbs — they would be less rigid and would not need to be isolated from the body’s inherent moisture.

So told IEEE Spectrum she believes the alloys in this device would be compatible with human tissue. Eventually, they could be used to build bioelectronic circuits between living tissue and computers, like brain-machine interfaces that would control artificial limbs or artificial neural networks.