With No Reply From NanoSail-D Satellite, NASA Wonders If It Actually Launched at All

Last week’s launch of NanoSail-D – NASA’s solar sailing nanosatellite that was reportedly launched from the Fast, Affordable, Science and... 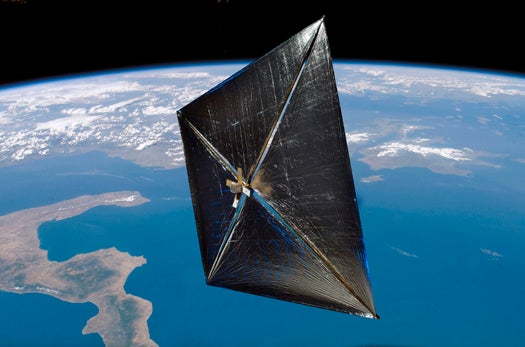 Last week’s launch of NanoSail-D – NASA’s solar sailing nanosatellite that was reportedly launched from the Fast, Affordable, Science and Technology Satellite (FASTSAT) last week – may not have gone as well as initially thought. In fact, it may not have happened at all. Though publicized as the first launch of a nanosatellite from a microsatellite in orbit, NASA hasn’t heard from NanoSail-D since last week, leading some to suspect that it never launched at all.

Nanosail was set to launch at 1:30 a.m. EST last Monday, and according to reports from NASA at the time the launch was a success. That launch should have triggered a three-day timer aboard NanoSail-D, at the end of which it would have deployed a thin polymer solar sail (NanoSail’s further mission was to test compact solar sail technology). That should have happened on Thursday, but NanoSail-D has not confirmed that it ever deployed its sail, and thus far NASA has not been able to contact the craft.

That’s led some mission handlers to wonder if NanoSail-D launched in the first place. An update posted to NanoSail-D’s mission page on Friday states “at this time, it is not clear that NanoSail-D ejected from the Fast, Affordable, Science and Technology Satellite (FASTSAT) as originally stated on Monday.”

The statement continues: “At the time of ejection, spacecraft telemetry data showed a positive ejection as reflected by confirmation of several of the planned on orbit ejection sequence events. The FASTSAT spacecraft ejection system data was also indicative of an ejection event. NanoSail-D was scheduled to unfurl on Dec. 9 at 12:30 a.m., and deployment hasn’t been confirmed.”

NASA mission handlers are still trying to contact their tiny satellite and troubleshoot possible issues that could have led to either a false positive on a launch that never happened, or the inability to make contact with an orbiting nanosat. Either way, NASA has confirmed that the other five onboard experiments on FASTSAT are operating as planned.