For the first time, scientists have observed a single molecule emitting light when sandwiched between broken segments of a carbon … Continued 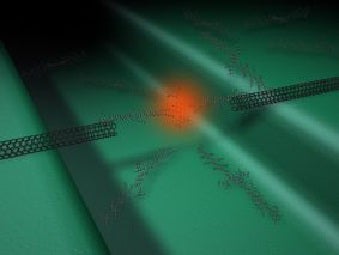 For the first time, scientists have observed a single molecule emitting light when sandwiched between broken segments of a carbon nanotube. The new device emitted just one photon for every 1 billion electrons, according to the study. The research could lead to development of optical electronics based on individual molecules. Or Tron costumes for the masses.

To build this Lite-Brite device, scientists from Germany, Switzerland and Poland created a tiny gap between two electrodes in a carbon nanotube and stuck a special molecule inside it. The gap was so small that it could only fit between one and three molecules, according to a report in PhysOrg. The rod-like molecule had electrical properties that enabled it to be trapped between the electrodes, completing the circuit.

When the scientists applied a voltage, they saw bright spots of electroluminescence, which is the emission of light when a current passes through an object. It’s the same phenomenon that provides the backlight on your wristwatch’s LCD display — and the body suits in “Tron” — but in this case, it was barely visible through a scanning electron microscope.

The light could be controlled by switching the voltage on and off, according to PhysOrg — proof that the molecule was where it should have been.

It’s important for the understanding of molecular electronics, which involves transporting electrical charges through molecules, according to Ralph Krupke, a researcher at Karlsruhe of Technology and DFG Center for Functional Nanostructures and a co-author of the paper describing the circuit. It was also a breakthrough for solid-state devices, because it integrates a

The paper is published in Nature Nanotechnology.