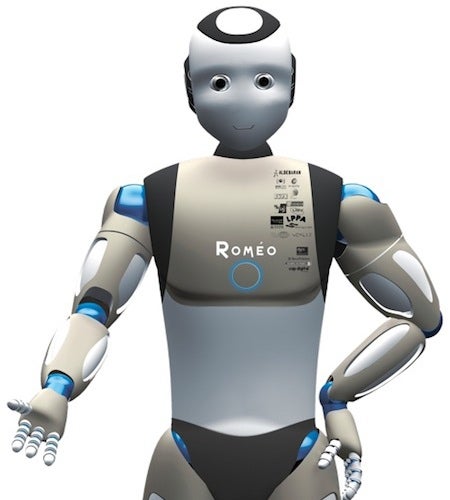 One of our favorite dancing robots, Aldebaran Robotics’ Nao, is getting a big brother designed to act as a personal assistant. “Romeo,” a 4.5-foot-tall humanoid robot with a mildly amused expression, will be officially unveiled in March.

Romeo is a $13.3 million project led by a cluster of French research organizations and is meant to assist the elderly and people with various disabilities, according to Aldebaran. It will have to pick up everyday objects, like keys, glasses, and bottles, and it will have to perform specific movements, like opening and closing doors and helping someone who falls to the ground.

Ideally, it will serve as a friendly companion that can help out around the house and keep tabs on its human’s health, as Rodolphe Gelin, head of cooperative projects at Aldebaran, tells IEEE Spectrum.

Romeo will have several innovations, IEEE reports, including articulated feet, a partially soft torso, a backbone with four vertebrae and a new kind of actuator. Communication will also be a focus, according to the project’s website — because voice and gestures will be the main method of communicating with Romeo, it will have to understand simple commands and even perceive intentions and emotions to figure out what it should do.

Like the Nao, Romeo won’t come cheap — it is expected to cost around $333,751 (€250,000). The robot will initially be available to university researchers, and a later version will be offered to hospitals and nursing homes. By fall 2011, Romeos will be given to vision-impaired patients for testing, and Aldebaran wants Romeo on the market by 2015.