It’s been a big week for those long-serving spacecraft we don’t always hear so much about. Earlier this week news... 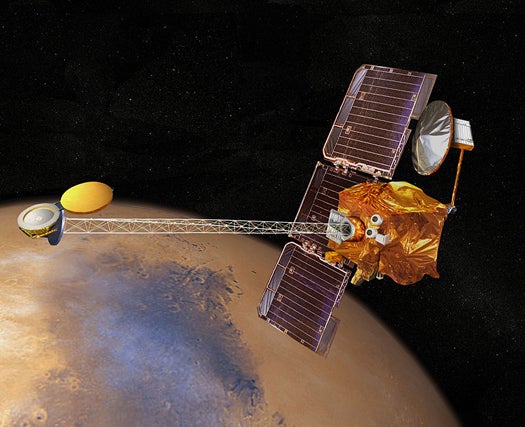 It’s been a big week for those long-serving spacecraft we don’t always hear so much about. Earlier this week news broke that Voyager 1 had crossed a benchmark boundary on the far fringes of the solar system, and now Odyssey, launched back in 2001, has surpassed the Mars Global Surveyor as the longest-running mission to Mars. As of yesterday, that’s 3,340 days of dutifully orbiting the Red Planet.

Those nine years have been fruitful for Odyssey. When we think about Mars science today, we tend to think about the rovers, Spirit and Opportunity, or the Phoenix lander. But Odyssey has been the eye in the sky for all three, helping to create climate predictions for those missions and serving as a communications relay for all three as well.

In fact, it was Odyssey’s early findings of evidence for water ice on Mars that led to the Phoenix mission in the first place. And when NASA’s next rover, Curiosity, touches down on the planet in 2012, Odyssey will work alongside the Mars Reconnaissance Orbiter to beam science data and communications back to Earth. So even though its primary science objectives were completed by 2004, Odyssey has been an extremely valuable asset for other mars missions ever since.

Aside from observing the Martian climate, part of Odyssey’s primary mission was to measure radiation levels on the planet to test the feasibility of human exploration. Odyssey probably won’t be around to witness the fruits of that labor, but mission handlers think Odyssey could have ten years of orbiting left in it. During that time it should be integral in enabling future missions that will lay the groundwork for an eventual manned mission.