How DARPA Is Making a Machine Mind out of Memristors

MoNETA, software that runs a memristor brain, could make artificial intelligence a reality 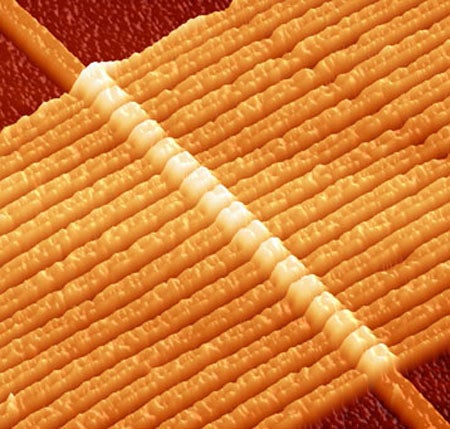 Artificial intelligence has long been the overarching vision of computing, always the goal but never within reach. But using memristors from HP and steady funding from DARPA, computer scientists at Boston University are on a quest to build the electronic analog to a human brain. The software they are developing – called MoNETA for Modular Neural Exploring Traveling Agent – should be able to function more like a mammalian brain than a conventional computer. At least, that’s what they’re claiming in a new feature in IEEE Spectrum.

There’s reason to be optimistic that this attempt might be different from all the previous AI let-downs that have come before it. Why? The memristor, a concept that HP first realized in 2008. The memristor, put simply, is an electronic component in which the resistance is dependent on the amount of charge that passed through it at a previous time. In other words, it remembers the state it was in the last time charge was applied, unlike a conventional RAM cell (which requires constant power to maintain the same state).

Their ability to both store and process information as it transfers charge (and to do so with far less power consumption) makes memristors more analogous to the neurons in the brain than any other previously developed electronic component, and they are small enough, cheap enough and efficient enough to someday be used to build computing platforms that function more like the brain: learning, making decisions, and even using a machine version of intuition to execute their roles.

The Boston U. team, by its own admission, doesn’t yet know exactly what these platforms will look like, but they seem very confident that they will soon be a reality. They also admit that, due to their benefactor (the DoD) they will likely first find a home in military tech; think autonomous vehicles that don’t just prowl the skies, but that actively engage in learning behaviors and problem solving to, say, search for IEDs or patrol territory for hostile intent. But the researchers envision a much broader role for MoNETA – and brain mimicking machines on the whole – in the near future.

Decide for yourself if MoNETA is the real deal by clicking through the source link below. It’s a somewhat lengthy but entirely interesting read.