Japanese Venus Probe Misses the Planet, May Get Another Chance In Six Years

A Japanese probe bound for Venus has missed its orbit and been seized by the sun’s gravitational pull, in a... 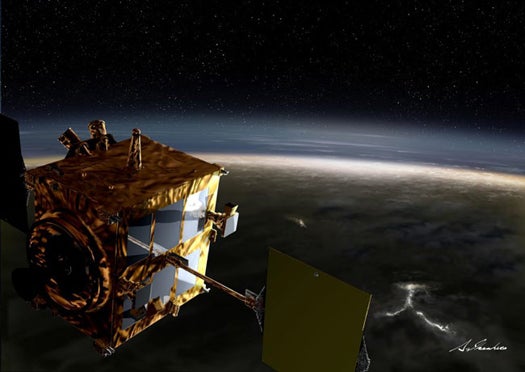 A Japanese probe bound for Venus has missed its orbit and been seized by the sun’s gravitational pull, in a major setback for Japan’s shoestring space program. The probe, called Akatsuki, isn’t necessarily lost however. JAXA officials are still in contact with the probe and may try to insert it into orbit around Venus when it passes near the planet again – in six years.

According to JAXA, an investigation is being launched into the cause of the failure, but initial assessments suggest that the mission handlers didn’t’ fire Akatsuki’s engines for long enough to place it in the proper orbiting position. Once it overshot the planet, the sun’s gravity got a hold on the probe, pulling it into a sweeping orbit around the star.

For Japan, the failure is a crushing letdown as JAXA – which gets by on far smaller budgets than the U.S. or the E.U. – was riding high on the recent success of its Hayabusa asteroid mission. Though troubled by glitches, Hayabusa managed to visit an asteroid and bring samples of asteroid dust back to Earth, a feat never matched by any other space program.

But JAXA has never completed an interplanetary mission, and six years is a long time to wait for a second shot (Japan attempted a probe mission to Mars back in 1998 but it was also riddled with problems and was abandoned a few years later). The $300 million Akatsuki probe was supposed to maintain an elliptical orbit around Venus ranging from just 190 miles above the surface to as far out as 50,000 miles, where it could study the planet’s climate.

And it still might. We’ll update you on Akatsuki’s status in about six years.