After a decade of planning, testing, and boring massive holes in the Antarctic ice with a huge hot water drill,... 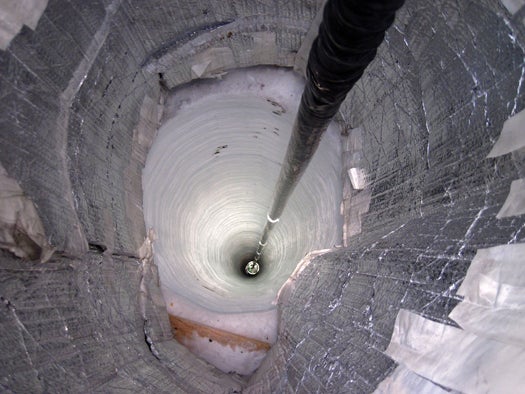 After a decade of planning, testing, and boring massive holes in the Antarctic ice with a huge hot water drill, National Science Foundation researchers and their partners completed the IceCube Observatory neutrino detector at the South Pole on Saturday, marking the beginning of a new era in neutrino astrophysics. The $279 million project will allow researchers to study some of the universe’s most fundamental yet largely undetectable particles at what is now the world’s largest neutrino detector.

Neutrinos are those elusive subatomic particles that originate across the universe – some from the sun, some from exploding stars in our galaxy and beyond, some from unknown cosmic sources – that don’t interact with regular matter very often (at any given moment, there are trillions passing through the human body). Because they hold no charge, the magnetic fields of stars and planets don’t bend the paths of neutrinos, making them particularly interesting to astrophysicists; catch one on the move and you can trace it’s path back to its point of origin.

Every so often a neutrino does interact with normal matter, and IceCube was designed to detect those interactions between water molecules in the ice and passing subatomic particles. IceCube consists of 5,160 optical sensors arranged in strings that have been lowered and frozen into 86 holes that were bored into the ice with a specially-designed 4.8-megawatt hot water drill. Those holes reach deep into the Antarctic ice bed – 8,000 feet in some cases – where the ice is very dark and optically transparent.

These sensors are networked over an area a half-mile on each side, increasing the odds that a neutrino will strike a hydrogen or oxygen atom, ejecting another particle called a muon and giving off a detectable blue light. From this collision data, researchers hope to probe the universe for the sources of neutrinos, which could lead to insights on all kinds of things from dark matter to supersymmetric particles.