IBM’s TriviaBot Watson to Take on Ken Jennings in Man Vs. Machine Episode of Jeopardy 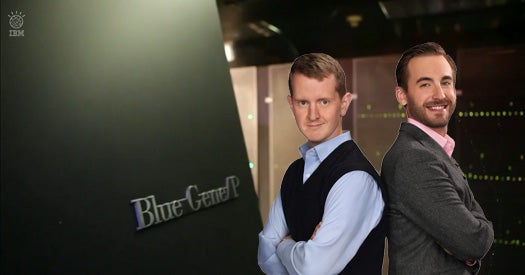 Watson, an artificial intelligence program created by IBM (and named after Thomas J. Watson, IBM’s founder, not Sherlock Holmes’s roommate), is designed as a question-and-answer bot, able to interpret and respond to questions posed in normal human language patterns. The natural use for such a program is, of course, the greatest game show that ever was or ever will be: Jeopardy!. In February, Watson will be facing off against two of Jeopardy!‘s toughest competitors ever: Ken Jennings, whose 74-day winning streak was the longest in the show’s history, and Brad Rutter, whose $3.3 million winnings are the show’s highest.

Creating an AI that can compete on Jeopardy! is an incredibly difficult task for any programmer. The venerable show poses questions not only as simple shows of trivia knowledge, but also puns, various forms of wordplay, trick questions, riddles, and other complex queries. It takes uniquely flexible and quick thinking to succeed at Jeopardy!, placing Watson on a pedestal with chess-playing robot (and IBM sibling) Deep Blue.

On February 14th, Watson will go head-to-head-to-head on a very special episode of Jeopardy!, playing against trivia legends Ken Jennings and Brad Rutter. (In case you were wondering, Watson’s spot at the challenger podium will be taken by an avatar–no word on what strained anecdote Trebek will coax out of him and then casually mock.) Watson has been prepping for the battle by sparring with other Tournament of Champions competitors, though neither IBM nor Jeopardy! has released the trivia-bot’s record against human competitors. You can see in the video above that some wordings can trip him up, so nobody knows exactly how capable a competitor he’ll be.

The winner will receive $1 million–if Watson wins, IBM will donate the money to charity, and both of the human competitors have pledged to donate half the prize if either wins.