Humanoid Remote Bomb-Squad Hand Could Be Deployed in Eighteen Months

British engineers say they are just 18 months away from a remotely controlled highly dextrous hand that could lead to... 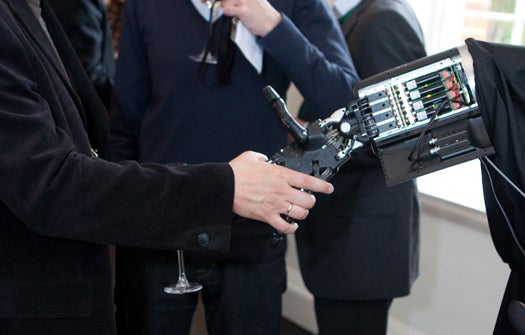 British engineers say they are just 18 months away from a remotely controlled highly dextrous hand that could lead to huge breakthroughs in telepresence tasks ranging from hazardous materials disposal to bomb disassembly. Controlled by 20 motors mounted below the wrist, UK-based Shadow Robot Company’s C6M2 hand mimics the movements of a hand wearing a special glove, allowing anyone to control the robotic hands without specialized training.

Each motor in the hand corresponds to a joint in the human hand, lending the humanoid hand very lifelike movements. The challenge, researchers say, is getting the pressure in the robot hand synced up with the pressure of real touch. For tasks like bomb disposal touch sensitivity will be key, and the company plans to spend the next 18 months to two years getting it exactly right.

If they can get it right, the hand would be a robotics breakthrough. While current bomb disposal robots require handlers that are specifically trained to manipulate their movements, a humanoid hand that functions smoothly under direction from a five-fingered glove would not only allow for more intuitive, natural movements, but would allow virtually anyone to step into the role of robot handler with little or no special training.

Such a hand doesn’t just have military applications; it’s easy to see how something like this could be a boon for remote surgery, cleanroom environments, and extravehicular activities in space as well. Enjoy a cup of joe with CM62 below.