Increasing web connectivity in the developing world has been a focus of philanthropists, international bodies like the U.N., and individual... 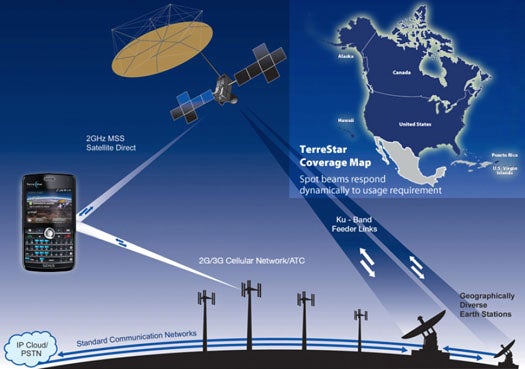 This diagram shows how Terrastar-1 can beam the Web to handheld devices – in this case in North America. Ahumanright.org wants to buy Terrastar-1 from its parent company and move it to an orbit over a developing nation to provide free Internet to the population there. Terrastar
SHARE

Increasing web connectivity in the developing world has been a focus of philanthropists, international bodies like the U.N., and individual states alike. But, like most grand visions, wiring entire countries for the Web is expensive. So how does a philanthropist sidestep the massive expense of building and launching a satellite that can beam Internet to remote regions of the world? You wait for a company to go bankrupt, then you buy their brand new communications satellite already in orbit on the cheap.

At least, that’s the idea. A philanthropic group called Ahumanright.org (universal Internet is that human right) has launched a site called “Buy This Satellite” that aims to raise $150,000 to bid for Terrastar-1, a school-bus-sized satellite launched in 2008. Terrastar-1 is currently in orbital limbo, so to speak, after its owner filed for bankruptcy. The group will also invest in the development of an open source, low cost modem for use in the developing world.

Once acquired, the group hopes to park the satellite over a developing country or countries–Papua New Guinea, the site points out, has an open orbital slot and only 2.1 percent of its population is online–and allow its citizens access to the Web for free. That, theoretically, will help educate the population, open up new avenues for commerce, and otherwise provide lagging economies with all the technological advantages offered to the wired world.

There are plenty of aspects of the plan that seem easy to poke holes in. For one, satellites generally go for more than $150,000 (even at a bankruptcy auction). And the phase one plan calls for hiring several full-time engineers for the project, but that’ll cost $50,000 per year per engineer (and that’s only if the engineers are content to work on the cheap)–well, you can see why we might be a bit skeptical.

However, the notion is both noble and ambitious, and we’re all about nobility and ambition. If the money can be found, a project like this has the power to seriously affect change in places where connectivity is scarce (if it’s available at all). Go to buythissatellite.org to do your part to purchase Terrastar-1. There might just be a T-shirt in it for you.

[Buy This Satellite via Gizmodo]