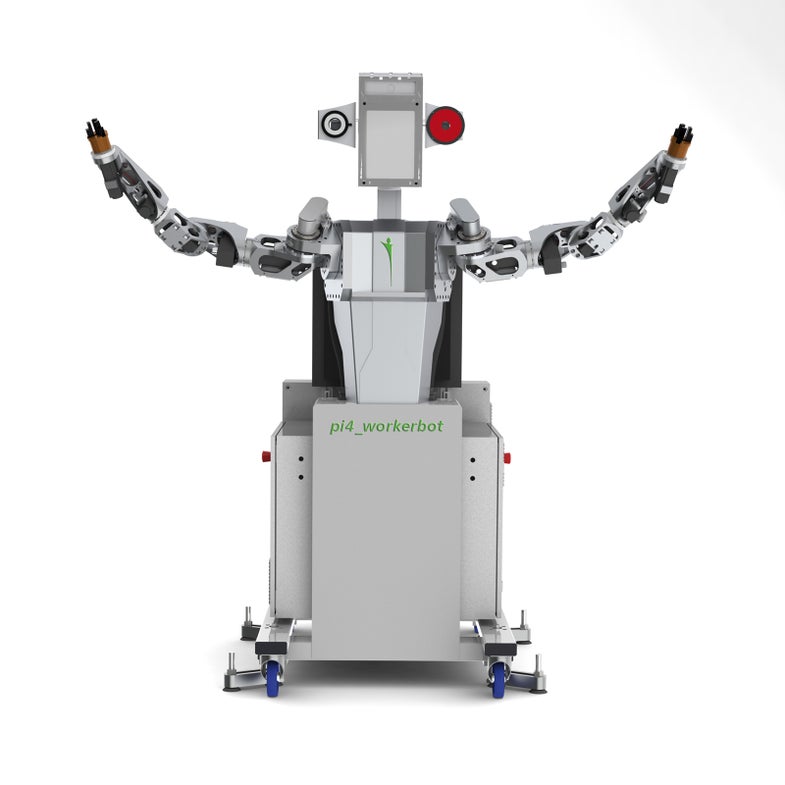 A new cheerful factory robot aims to keep European industry competitive by working alongside humans, smiling when it accomplishes a task or when its bosses ensure it stays busy. The pi4_workerbot, developed at Fraunhofer labs, has fingertip sensitivity — it completes the perennially difficult robot task of grasping an egg — and a variety of facial expressions.

It is equipped with three cameras and two arms and stands as tall as an average human, so it can be seamlessly integrated into assembly lines, according to Fraunhofer’s Research News.

Although its torso is less dextrous than other humanoid bots like Robonaut, pi4’s hand and arm sensitivity could be useful for assembly line work. It can pick up two pieces — say, a gear wheel and a housing — and carefully fiddle with them until the two pieces engage. “The robot smiles, and places the correctly assembled part on the conveyor belt,” a Fraunhofer news release explains. The robot’s shoulders swivel, affording it several degrees of freedom, and it also has an rotating wrist, which allows precise hand movements.

It has a 3-D camera on its forehead to see its surroundings, and two other cameras allow it to inspect factory items with greater precision than a human eye. In an automotive factory, for instance, it could examine a chrome-plated object by studying how light reflects off the material. The robot is a product of the European Union-funded PISA project, which aims for greater industrial efficiency using robots.

“If a company needs to produce something fast but has no worker resources, the idea would be to rent the workerbot and integrate it into human working spaces,” Fraunhofer researcher Dragoljub Surdilovic told The Engineer.

Even better, it can work 24 hours a day, and it would prefer to stay busy. “If its work is going smoothly, it will smile happily. If it looks bored, it’s waiting for work, and the production manager knows the production process can be speeded up,” according to Fraunhofer Research News.