Roombas are cute and everything, but when they annoy you, they don’t respond well to being kicked in the side.... 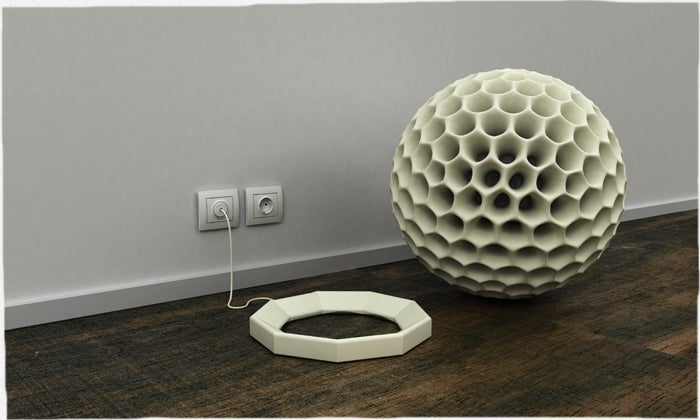 Roombas are cute and everything, but when they annoy you, they don’t respond well to being kicked in the side. Not so with Dust Ball, a new robotic vacuum cleaner concept designed by a Dutch engineer. Inspired by a hamster ball and resembling a pollen grain, Dust Ball can be pushed or kicked in any direction to clean.

Watch it roll in this video. It moves by shifting its internal weight; an internal ball bearing moves on two axes and can move Dust Ball in any direction. It rolls around sucking up debris, and when its dustbin is full, it starts to glow and rolls to its docking station.

Creator Dave Hakkens says he wanted Dust Ball to be tough and industrial-strength, but also friendly-looking.

While Roomba and a host of other robotic vacuums are mostly intended for households, Hakkens says Dust Ball’s tough and simple construction could be used in large spaces with impediments like cables, door thresholds and walls, like airports, for instance.

And if it rolls in front of your feet, just kick it out of the way.