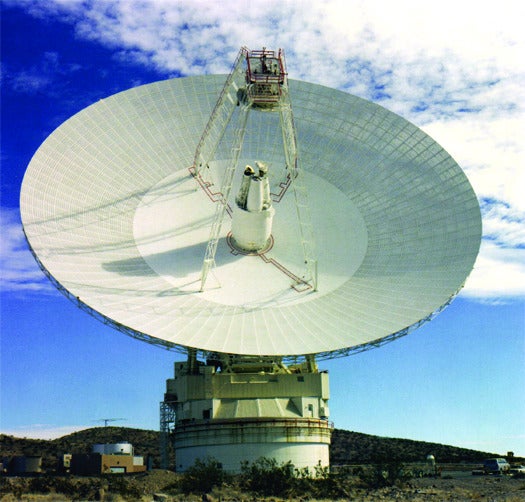 Since 1966, the 41,000-square-foot Mars Antenna at the Goldstone Observatory in the Mojave Desert has been communicating with robotic rovers on other planets and with deep-space probes. Its large dish makes it one of the best for sorting the faint radio signals from NASA’s most distant probe, Voyager 1—10 billion miles away—from naturally occurring ones such as pulsars. But ever since it was built, an oil leak has plagued its operation.

The antenna’s dish rotates on an oil-lubricated bearing. The design let oil leak through the bearing’s track and degrade the grout below, making it hard to point the antenna accurately. The observatory had to be shut down twice a week to level it with wedges and extra grout.

In October, NASA started installing a new track and oil-proof grout for a permanent fix. Making the swap required jacking up the seven-million-pound antenna a quarter of an inch, which, says Wayne Sible, the manager responsible for the antenna’s operations, seemed as difficult as balancing a five-foot stack of dishes on his pinky finger.

Jeff Osman, one of the antenna’s technical managers, says the repairs should buy scientists at least an extra eight hours a week to retrieve data from, and give instructions to, spacecraft. “Time on the antenna is a lot like disk space on your computer—there’s never enough of it,” he says. “For an astronomer, this extra time is like winning the lottery.”

THE FIX
STEP 1: LIFT ANTENNA
The crew carefully placed twelve 600-ton hydraulic jacks around the seven-million-pound dish assembly. They also ensured that they lifted perfectly in sync so that the dish wouldn’t warp as they raised it a quarter of an inch high.

STEP 2: REGROUT
The dish’s bearing’s track was leaking oil lubricant, degrading the grout below. Once the team lifted the dish, they swapped out the old track with a thicker one. They also replaced the grout under the track with a custom epoxy grout that is oil-proof.

STEP 3: RECALIBRATE
The antenna resumed operations on November 1 after eight months of repair, testing and calibration. Now it can again communicate with spacecraft, such as the Cassini probe exploring Saturn, the Mars rovers and Voyager 1.