Wii-Powered Robot Chair Lets Infants Zoom Around On Their Own

"Independent mobility is crucial in the development of typical infants," says the research 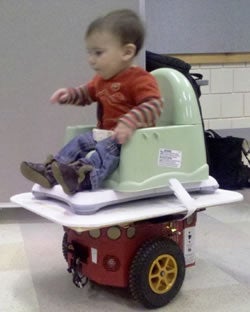 A baby transporter for mobility-impaired children would ensure confidence, independence and proper cognitive development, researchers say. So they recommend babies start driving around on sonar-equipped robots.

At a rehabilitation conference in Las Vegas, researchers at Ithaca College described attaching a child seat to a Wii Fit balance board and mounting the whole setup on a Pioneer 3 robot. Like an infant Segway, it moves in whatever direction the baby leans, and built-in sonar helps avoid collisions.

It worked for babies aged 7 to 9 months, according to a paper on the Wii ‘bot. Babies leaned forward to grab a toy or a drink, and they wheeled forward. They also zoomed around on their own without coaxing, the paper says. Parents can assume control using a wireless joystick that acts as a master override switch.

Doctors say such a contraption could help children with spina bifida or cerebral palsy who can’t explore the world on their own. Independent movement is crucial for infant development, the Ithaca researchers say.

We say giving mobility-impaired babies a way to move around is a great idea. As an added bonus, it prepares them for a future wearing an Iron Baby exoskeleton.