Since early man fashioned that first stone tool, technology has been a cumulative process – we had to have stone... 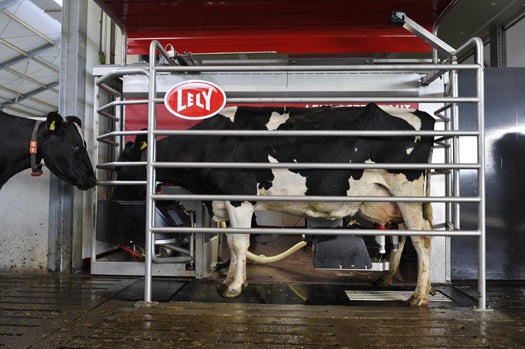 Since early man fashioned that first stone tool, technology has been a cumulative process – we had to have stone tools to get to metals to get to spaceships to get to Facebook. Or something like that. The point is, every field of technological inquiry has its waypoints and milestones, and robotics – a field that notches mind-blowing advances with increased regularity – has just hit upon another monumental breakthrough: teat detection.

Don’t laugh, for these are the stepping stones that lead to revolutions. The teat detection system (or TDS) is just one of the backbone technologies behind agriculture tech maker Lely’s Astronaut A4 robotic milking system. The fully automated dairy milking suite removes human-cow interaction almost entirely from the farming process. And all TDS-related joking aside, it’s kind of a big deal.

Agricultural practices, after all, are a subject of near constant debate. We need to farm, obviously, but the treatment and well being of the animals that provide us with sustenance is a hot-button issue, as well it should be. Lely, for its part, injects a thought-provoking assertion into that debate: Robots are the “natural way of milking” cows.

It sounds counterintuitive, but hear them out. The Astronaut A4 creates a new paradigm of farming in which – to quote Lely’s press materials – “the decisions shift from the farmer to the cow.” The cow chooses when it wishes to be milked, enters the milking stall at its leisure, is gently cleaned and milked (by way of the TDS as well as 3-D cameras and sensors that track the cows position), and is sent on its merry way. The automated stall even offers the cow up to four kinds of feed that it can choose to munch on while it is milked.

Ostensibly, this makes for happy cows. But it also makes for happy farmers, who interact with the robots but rarely, if ever, with the cows. It makes farming less labor intensive and reduces costs. Singularity Hub calls it “a morally superior means of farming.” We’ll leave the moral pontificating to others, but we can say that the Astronaut A4 – TDS and all – is pretty revolutionary. Figure out how to trap all that gastro-emitted methane and use it to power the machines (or just put the cows on power-generating treadmills) and you’re looking at the high-tech, animal friendly, sustainable farm of the future.