Along with meeting heads of state and talking free trade, President Obama made some new friends at the Asia-Pacific Economic... 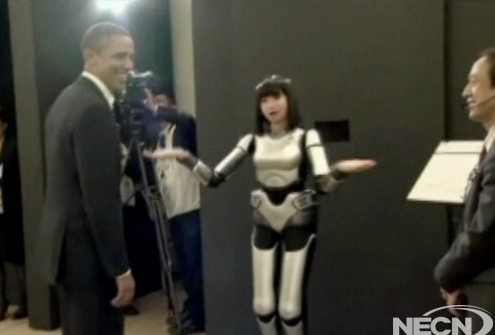 Along with meeting heads of state and talking free trade, President Obama made some new friends at the Asia-Pacific Economic Cooperation Summit last week. Before entering a meeting in Japan, he met a Geminoid F robot and a group of yowling robotic seals.

In the video below, Obama bemusedly listens to a speech by a Geminoid, as robotic seals are heard mewling in the background. He talks to Takanori Shibata, the creator of Paro, and acknowledges the seal ‘bots could be helpful in hospitals or other places in need of a pick-me-up. Is the commander-in-chief stressed out? He seems particularly taken with the seals.

Finally, Obama takes a spin in Toyota’s i-REAL personal mobility vehicle. He drives about an inch forward and almost leaps out when the machine suddenly tilts back.

We don’t care how much the trip cost — video of Obama caressing plush robotic seals is priceless.