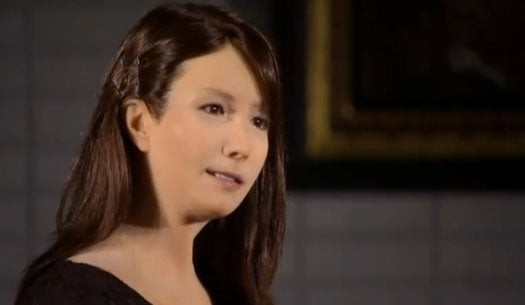 There was a time when manufacturing jobs were the only ones workers really had to fear losing to robots. Since then we’ve seen robot receptionists, robot drivers, and even robot nurses (robots even give sponge baths). Now, highbrow theater types have reason to sweat the robot invasion as well. Japan’s Geminoid F fembot has taken the stage in Japan, starring in her own short theatrical production.

But it’s not curtains for live acting just yet. Geminoid F wasn’t automated during the play, but rather manipulated by a human controller backstage. And she remained seated for the duration of the production, limiting her versatility on the stage. But she conversed and gestured with her human stage-mates, gesticulating and showing emotion – albeit a bit stiffly.

Her foil in the play (titled Sayonara), actress Bryerly Long, acknowledged that Geminoid F lacks a “human presence,” making her feel like the only person on the stage. Which makes sense, and could speak to just how effective the robot thespian was at tackling her role. After all, she was cast to play the role of an android.