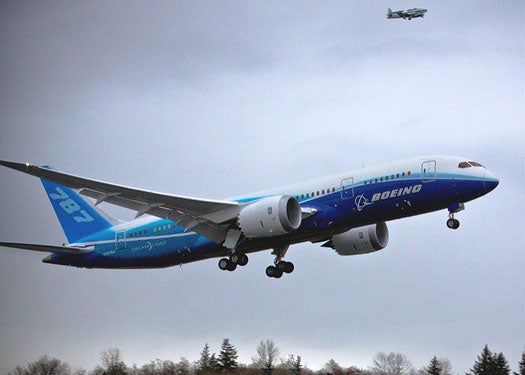 In yet another setback for Boeing’s much anticipated – and anticipated, and anticipated – 787 Dreamliner, a test flight was forced to make an emergency landing in Texas last night after smoke began clouding the cabin. Boeing is evaluating flight data and trying to pinpoint the origin of the smoke aboard its next-gen jetliner, which is now almost three years behind schedule.

The smoke originated in the tail of the plane at the rear of the passenger cabin. The plane was carrying a range of flight test gear, including equipment for monitoring the system that delivers nitrogen gas to the fuel tanks to prevent vapors from igniting. That part of the test flight seems to have gone well enough, but something went awry somewhere along the way, forcing the flight from Yuma, Ariz., to make an emergency stop in Laredo, Texas.

The pilot landed the plane and initiated emergency measures, which required the 42 crew members aboard to evacuate via the plane’s emergency slides. Now the Federal Aviation Administration and the National Transportation Safety Board are monitoring Boeing’s investigation into the incident, and that could mean further delays for the storied Dreamliner.

The 787 Dreamliner is Boeing’s next-generation jet airliner constructed of composite materials to make it lighter and more fuel efficient. But a slew of setbacks, including late engine deliveries from Rolls Royce and various design problems stemming from the fact that the plane’s hardware is being sourced from variety of suppliers around the world have led to one production delay after another.

Boeing’s most recent projections for delivery of finished Dreamliners put the planes in the hands of Japan’s All Nippon Airways in the first quarter of next year, but it’s now unclear if Boeing will be able to keep that timetable.