Those spiky things around the stadium's top? Those are 20-foot-tall wind turbines. 80 of them 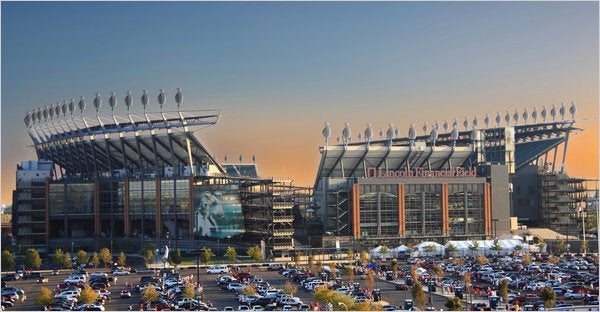 The Philadelphia Eagles announced a partnership with Solar Blue to completely re-green their stadium (and to make endless puns about “greening” the team with the deep green uniforms). It’s actually pretty groundbreaking stuff: They plan to use a combination of on-site wind turbines, solar panels, and a dual-fuel (biodiesel and natural gas) plant to run on completely self-generated renewable energy by September 2011. It’ll be the only stadium in the world that can make that claim.

Stadiums are quite conducive to this kind of renewable energy initiative: They’re huge, with a ton of open air and roof space for devices like wind turbines and solar panels that need both room and sun. There have been efforts to capitalize on that before, as well as some other ambitious plans like Qatar’s solar-powered stadium–but that’s more than a decade off, at least. The Eagles have made some strides toward these kinds of projects before, switching to 100 percent recycled paper materials (napkins, plates, etc), composting many tons of organic waste, and converting used kitchen oil to biodiesel. But this project takes it to a totally new level.

The Eagles are partnering with Solar Blue, which will install the $30 million system consisting of 80 20-foot wind turbines (vertical, rather than bladed, to reduce noise and danger to nearby birds), 2,500 solar panels, and that 7.6-megawatt dual-fuel generation plant that’ll be situated adjacent to the stadium. About 15 percent of the stadium’s power will come from wind and solar, individually, with the remaining 70 percent coming from the plant. The plant is expected to create about 1.039 billion kilowatt-hours of electricity every year–enough to power 26,000 homes.

Solar Blue will be the exclusive energy supplier for the Eagles for the next 20 years, over which time the Eagles estimate the stadium will save about $60 million in energy costs. After those 20 years, the Eagles will be allowed to sell excess electricity back to the grid–in this case PECO, the local energy supplier.