A new underwater robot designed to chase marine organisms and record their life stories combines the best attributes of long-distance... 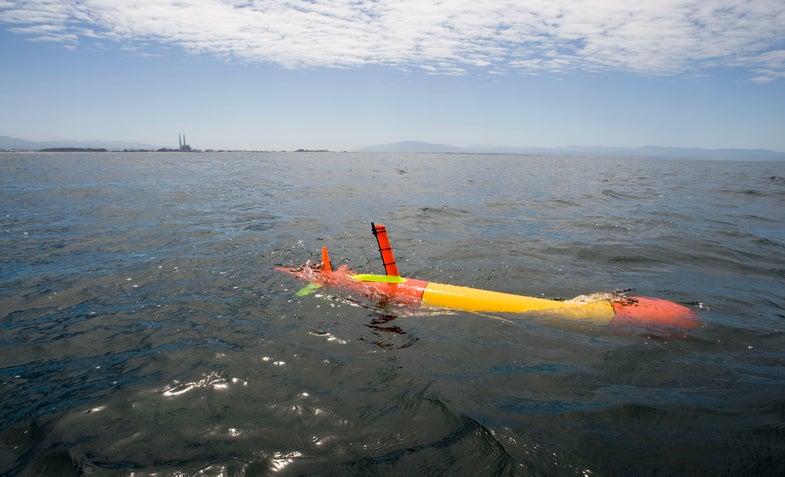 Tethys, designed at the Monterey Bay Aquarium Research Institute, represents a new class of autonomous underwater vehicles. Most AUVs sacrifice range for robust science instruments, or vice versa, leaving scientists with an incomplete picture of life on the seas. Tethys, on the other hand, can travel at high speeds for hundreds of miles, float with the currents for weeks at a time and carry a wide range of instruments.

For most of October, it crisscrossed Monterey Bay as part of an experiment to track microscopic algae patches. It did such a good job that its creators hope to send it to Hawaii eventually, using high-powered disposable batteries.

The robot’s creator, Jim Bellingham, spent four years trying to build an AUV that could bring agility and endurance to the study of oceanography. In the past, studying phenomena like algal blooms depended on luck and timing — oceanographers would stick an instrument on a mooring and hope algae would drift past it, or they would schedule a cruise and hope the bloom would happen while they were at sea, he explains in a MBARI news story.

“Tethys can travel to a spot in the ocean and ‘park’ there until something interesting happens,” he said. Once a bloom occurs, Tethys can switch into high gear and follow the bloom as it evolves, much like biologists on land would follow migrating animals.

The new robot can make its own decisions, unlike most AUVs, which are programmed to follow a specific path through the water. Tethys can make some decisions without human intervention, much like its cousin ‘bot, Gulper.

Tethys can also work in concert with other short-range AUVs, which might have even more science instruments on board. In the recent algae experiment, Tethys would park in an algae patch and pinpoint its center so scientists could send in other robots for more extensive analysis, as Sandeep Ravindran at Nature News explains.

Best of all, it will only cost a bit more than the average glider, which runs about $140,000. It’s cheap enough that individual labs can buy them, Bellingham said.