The Obama administration may have axed NASA’s ambitious manned moon exploration plans for even an even more ambitious deep space... 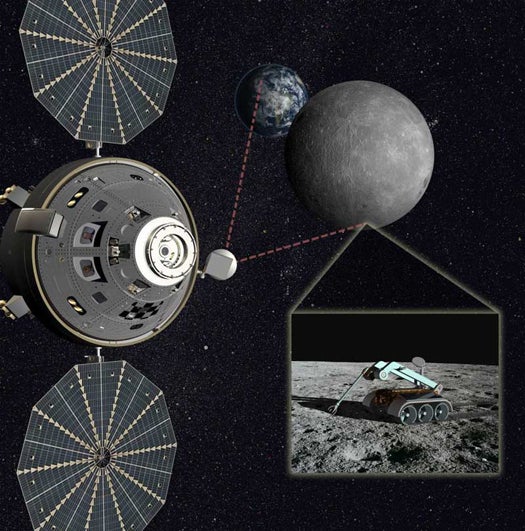 The Obama administration may have axed NASA’s ambitious manned moon exploration plans for even an even more ambitious deep space exploration agenda, but for those developing the technologies that will one day take us to deep space the moon is just too ripe a testing ground to ignore. Lockheed Martin is pitching NASA what’s being called an L2-Farside Mission that would launch a manned Orion spacecraft into a stationary halo orbit on the other side of the moon.

The mission, Lockheed says, will serve several purposes. Most immediately, it would allow astronauts to study, via unmanned robots, some lunar real estate that hasn’t been seen with human eyes since the Apollo missions. But its real function is to test out technologies and skills that will be necessary to make a manned trip to an asteroid, and then on to Mars.

The idea is to park an Orion space capsule at the L2 Lagrange point about 40,000 miles above the moon’s far side, where the combined gravity from the Earth and the moon would allow the spacecraft to essentially hover in one place in sync with the moon. From there, the astronauts would deploy and conduct remotely-operated surface science, collecting rock samples and exploring the South Pole-Aitken basin, one of the oldest craters in the solar system. From the L2 point, the capsule would continuously maintain line of sight with both the Earth and the far side of the moon.

But the mission would also serve as a test bed for everything from the Orion capsule to the astronauts themselves. The medium-duration missions would test the durability of both the crew and the vehicle over several one-month spans before attempting an asteroid mission, which would likely last six months to ensure both bodies and capsules could withstand prolonged doses to deep space radiation. It would also allow NASA and Lockheed to demonstrate the high-speed reentry necessary for return trips from deep space – speeds reaching up to 50 percent faster than re-entry from LEO.

Lastly, astronauts on an L2-Farside mission would travel 15 percent farther from Earth than the Apollo astronauts did and spend nearly three times longer out in the vacuum. Essentially, the L2-Farside missions would be stepping-stones to prove that human stamina and technological wherewithal are both where they need to be to take the next big step out into deep space.

Of course, Lockheed isn’t going anywhere by itself. To get to the Lagrange point without resorting to a complicated multi-rocket scheme, Lockheed needs NASA to supply a new heavy lift launch vehicle – something that the space agency is working on but doesn’t have on the shelf. It a new heavy lifter does materialize, Lockheed sees an L2-Farside mission feasible as early as 2016.