An Airbus A380, the massive double-decker 525-seater airplane, suffered what’s being referred to as an “engine disintegration” during a flight,... 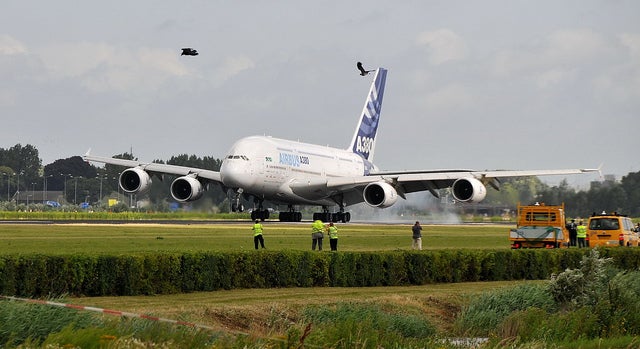 An Airbus A380, the massive double-decker 525-seater airplane, suffered what’s being referred to as an “engine disintegration” during a flight, showering a western Indonesian island with debris. One of the plane’s engines suffered some kind of failure resulting in a small explosion shortly after taking off from Singapore, but according to reports, the plane remained relatively (and surprisingly) stable and calm, turning around and landing safely back in Singapore 90 minutes later with no passenger injuries at all.

The A380, the world’s biggest passenger jet, has had more than its fair share of struggles getting to market, with multiple delays and production problems. Qantas, the carrier, claims there was no explosion, which doesn’t exactly jibe with passenger accounts of “a big boom” followed by flying shrapnel and a hole in the plane’s wing where the engine used to be. This is the most serious mechanical problem the A380 has had so far, though not the first, and some airlines (including Qantas) are grounding their A380s until the cause of the engine failure can be found and addressed.