After a Short Delay, Shuttle Discovery’s Final Mission is Go for Launch [Updated]

Will ferry a crew of six, plus one Robonaut, to the International Space Station 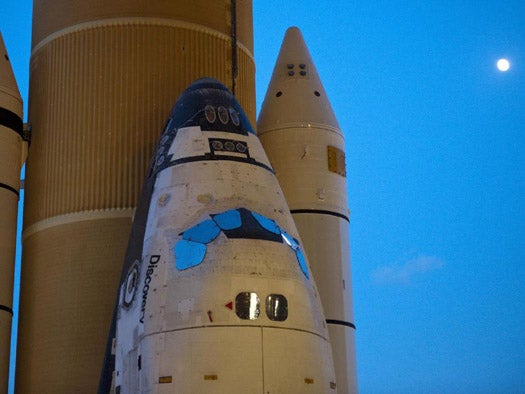 After a two-day delay and a good deal of much-deserved sentiment, the Space Shuttle Discovery – NASA’s oldest active shuttle – is at the launch pad and go for launch for its final mission, with liftoff slated for 3:52 p.m. EST tomorrow. Technicians are spending the day making the final inspections of the external liquid oxygen feedlines, and onboard ground communications will be activated this afternoon. It will be Discovery’s 39th flight in 26 years.

For its final performance, Discovery will ferry a crew of six to the International Space Station, though you could call it a crew of seven if you count Robonaut 2, a humanoid ‘bot that will spend the next decade aboard the ISS helping astronauts aboard the station conduct experiments, keep the station up to spec, and possibly even help perform repairs to the outside of the station during spacewalks.

The mission marks the end of service for Discovery, which has a storied service record that includes the deployment of the Hubble Space Telescope and the two return-to-flight missions after both the Challenger and Colombia disasters. Needless to say, Discovery was a workhorse for NASA and her retirement is both a milestone for the program and an emotional day for the flight crews and program employees that worked with her. Said launch director Mike Leinbach at a news conference yesterday: “There’s still a certain amount of disbelief that it’s really her final launch. It’s difficult to accept emotionally. But rationally, we all know it’s coming to an end, and we need to get on with it.”

The flight was originally slated for Monday but was pushed back to Tuesday when helium and nitrogen leaks were discovered in the pressurized portion of the spacecraft. Longer-than-expected repairs then pushed the launch back to Wednesday. There’s a 70 percent chance the weather will be suitable for launch tomorrow. If the weather turns, the mission might be in trouble as Thursday is supposed to bring rain to Cape Canaveral. If the mission cannot launch by Sunday – possibly as late as Monday – it could be grounded until December.

There’s one more shuttle flight on the docket, to be flown by Endavour in February and March of next year. NASA would like to tack one more mission to the program for sometime in mid-2011, but it’s unclear whether lawmakers will fund the mission.

Update: [8:45] NASA has delayed Discovery’s planned launch for at least another 24 hours to allow more time for crews to troubleshoot the problem with one of the Shuttle’s engine controllers. The mission will now be scheduled for launch sometime on Thursday.