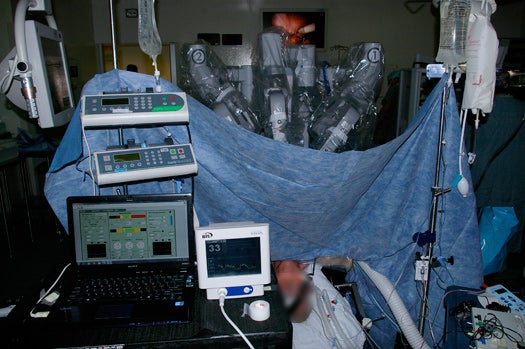 I’m not sure I would trust robots named McSleepy and DaVinci to knock me out and cut me open, but that’s what one brave soul just did, when he had his prostate removed at McGill University Health Centre for the world’s first all-robotic surgery.

DaVinci is a widely used surgical robot that can be controlled by surgeons from remote locations, and McSleepy is, appropriately, an anesthesia bot. The two collaborated for the first time ever in this groundbreaking surgery, performed at Montreal General Hospital. Their surgeon masters kept them closely monitored, of course, but the use of the bots provided for a higher level of precision than would be achievable with humans alone.

DaVinci sends 3D HD images to the surgical team, where they operate its arms via video control. McSleepy makes the perfect partner for such an operation. Anesthesia can be difficult during robot surgeries, because the patient has to be positioned just so, with a high level of muscle relaxation. Using McSleepy guarantees the same quality of care for every surgery, with precise configuration for that operation’s specific needs.

The success of this surgery makes it likely that DaVinci and McSleepy will team up again. The researchers plan to test robotic surgery and robotic anesthesia across a variety of surgeries and patients.