Didn’t receive your invite to the dedication ceremony for Virgin Galactic’s Spaceport America near Las Cruces, New Mexico on Friday?... 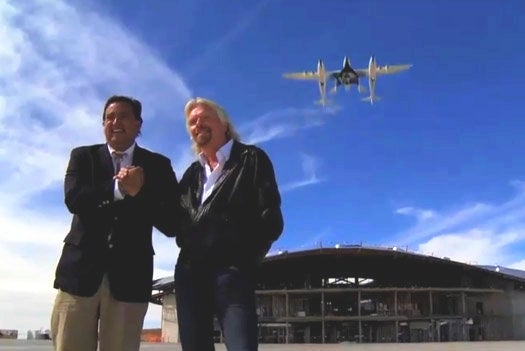 Didn’t receive your invite to the dedication ceremony for Virgin Galactic’s Spaceport America near Las Cruces, New Mexico on Friday? Ours was lost in the mail as well, but this video of the event, which saw the christening of the facility’s nearly two-mile long runway and other facilities as well as a flyover and landing by the Virgin space vehicle duo, surfaced Saturday so the rest of us could join in on Sir Richard Branson’s fun.

Branson, owner of Virgin Galactic, was joined by New Mexico Gov. Bill Richardson in dedicating Spaceport America, which was built with taxpayer funds under the agreement that Virgin Galactic would headquarter its space tourism operations there. The facilities are designed to accommodate just about every aircraft in the world and it’s hoped it will begin launching day-to-day space tourism flights starting in 2011 as well as regular commercial payload flights as private space companies come into their own.

To mark the occasion, Virgin Galactic’s mother ship – White Knight Two – came screaming low overhead for the cameras cradling SpaceShipTwo, the jet-powered space plane that will carry tourists to the edge of space. Some 380 people have already put down deposits for the $200,000 flights, which will last about two-and-a-half hours, including five minutes of weightlessness. Branson expects to have tourists in space, himself included, within 12 to 18 months.