Anyone trying to get onto the grounds of the Nevada National Security Site – the installation housing tens of millions... 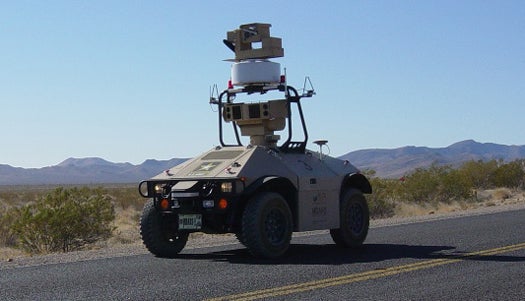 Anyone trying to get onto the grounds of the Nevada National Security Site – the installation housing tens of millions of cubic feet of low-level radioactive waste and site of many nuclear weapons tests back when they were militarily fashionable – will now face a new smart layer of security beyond the usual fences, sentry towers, and security cameras. Intruders will first have to get past the Army’s new robotic sentries that now roam the sprawling facilities vigilantly seeking out security threats.

The NNSS, only about 60 miles from Las Vegas, stretches across 1,360 square miles of Nevada desert. It’s a great place to, say, fire off experimental nuke tests, but it’s also a formidable amount of perimeter to secure. So the Army has reduced its static security infrastructure load – cameras, motion detectors, buried cables, light towers, etc. – drastically by deploying three Mobile Detection Assessment Response Systems (MDARS), one of which is already on patrol as the others are being prepped.

The MDARS are camera-equipped but unarmed, so they still rely on their human counterparts in the case of a security breach. But the diesel-powered MDARS can putter about the property for up to 16 hours on a tank of fuel autonomously, looking for security threats or signs that someone has entered the property without authorization. They can also take inventory of objects around the site and interact with other security systems like gates and locks via RFID. Which is comforting, considering the site isn’t just a radioactive waste dump but also a weapons physics lab and testing ground.

The facility’s administrators estimate the savings in deploying the MDARS rather than implementing other security infrastructure are $6 million up-front with an annual savings of $1 million annually after that. We’ll be sure to let you know when the video surfaces of one of the ‘bots autonomously mowing down a target with an integrated automatic weapon (apparently the MDARS have been previously tested with weapons systems aboard) but until then you’ll have to settle for the video below, which is still amazing given the massive amount of space these robots have to patrol.