Because even toddlers need to smash 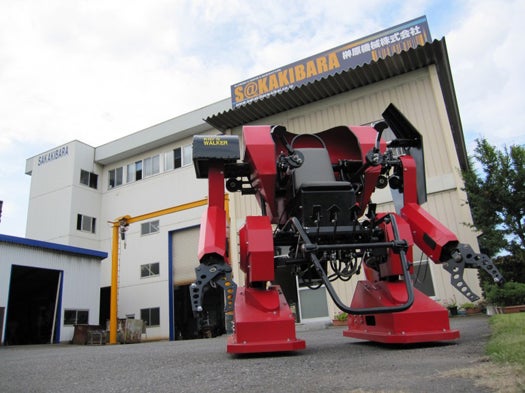 It's a robotic exoskeleton for small children. What could possibly go wrong?. Sakakibara-Kikai
SHARE

If you think you can’t motivate the kids to put down the Sega or whatever it is they’re playing with these days, Japanese robotics manufacturer Sakakibara-Kikai would beg to differ. The company that created the Landwalker bi-pedal exoskeleton has created a five-and-a-quarter-foot exoskeleton just for the kiddies that is sure to captivate even the most technophobic youngster, assuming such a thing exists.

Sakakibara-Kikai developed the Kid’s Walker exoskeleton after repeated requests by children to ride in the much larger Landwalker which, at just over eleven feet tall, might be a bit too much machine for a market segment still mastering the common pedal-powered bicycle. Kid’s Walker is powered by gasoline, weighs nearly 400 pounds, and, quite frankly, is kind of menacing.

That being said, it actually seems pretty safe by appearances. Rather than bounding destructively along Avatar-style, Kid’s Walker shuffles slowly around, maintaining a stable center of gravity. The hand controls are also restrained to acceptably safe levels, prohibiting balance-threatening fast motions. Moreover, features like Gatling cannons and shoulder-mounted rocket installations do not come standard, so you’ll have to figure out how to acquire those on your own.

The most menacing thing about Kid’s Walker is actually the price: the manufacturer hasn’t officially set one, but they have said that in Japan it would likely sell at around $21,000. See it shuffle below.