After investing eight years and $1 million, Turkey has now joined the elite club of countries with humanoid robots, finally... 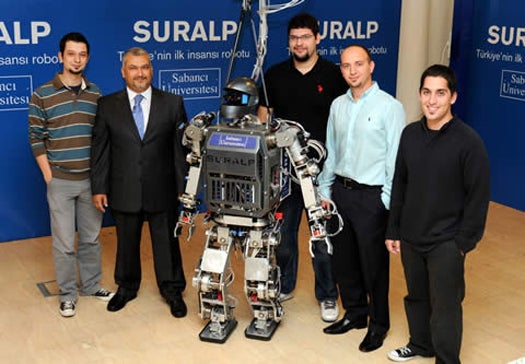 After investing eight years and $1 million, Turkey has now joined the elite club of countries with humanoid robots, finally introducing SURALP to the public in Istanbul on Wednesday. Opting for the traditional acronym-nomenclature, SURALP stands for “Sabanci University Robot Research Laboratory Platform.”

Standing 164 centimeters tall and weighing 114 kilograms, SURALP has six joints in each limb, enabling it to maintain its balance while walking across a variety of surfaces. It has cameras installed into its head to help it perceive objects in its path. If it does stumble, it can reach out for support from a nearby wall.

Turkey’s robot may not really dazzle compared to Japanese and American counterparts, but SURALP represents a big step for the country’s robotics program. The development of humanoid bots has spread recently beyond the traditional robotics powerhouses: Iran’s Surena-2 has been seen working the talk-show circuit. SURALP is a crowd-pleaser, too. Its communication is limited to nodding “yes” or “no,” but it can perform the most important robotic tasks: dancing and fetching beverages.

Watch SURALP in action below: