A new robotic exoskeleton based on a military design will help paraplegics walk once again on their own two legs.... 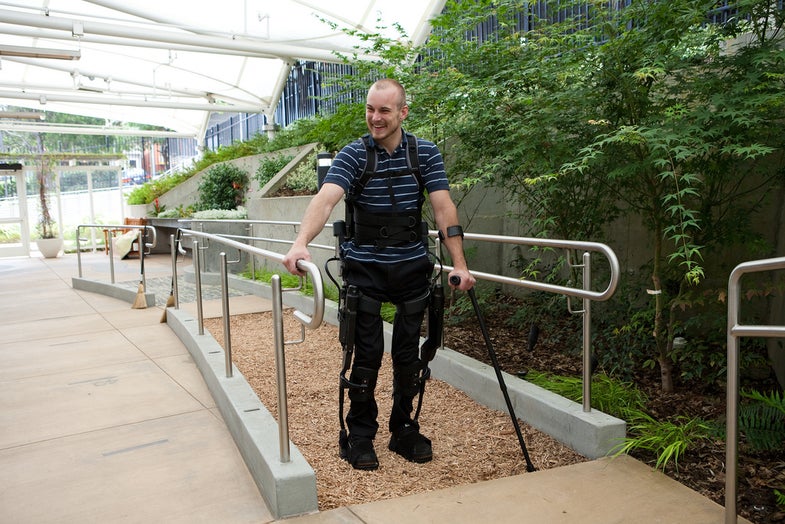 A new robotic exoskeleton based on a military design will help paraplegics walk once again on their own two legs.

The eLegs system can remove the persistent presence of the word “no” — a word with which paraplegics have become all too familiar, according to the Berkeley Bionics project’s CEO, a man named Eythor Bender.

“I think we are demonstrating here that there is no such word,” he says, in a particularly dramatic press video. His heavily accented English lends an air of X-Men-esque mystique to the project.

The exoskeleton, unveiled Thursday, will be offered to rehabilitation centers for use under medical supervision, according to Berkeley Bionics. It is artificially intelligent, although the company doesn’t explain in detail what this means. It attaches with some Velcro and backpack-like shoulder straps, so a user can wear it over clothes and shoes. Users must be able to transfer themselves from a wheelchair to put it on.

It’s based on the Lockheed Martin HULC project, developed to help soldiers heft the things they carry. Lockheed licensed the technology to Berkeley Bionics last year.

In the video below, tester Amanda Boxtel, who has been a paraplegic since suffering a spinal injury in 1992, explains the surreal experience of walking again: “To take my first steps in the eLEGS was just astounding, because I bent my knee for the first time in 18 years, and I placed my heel on the ground, and then I transferred my weight,” she says. “It was so natural, and that was what really gripped me.”

Patients with spinal cord injuries could use the device to re-learn how to walk while they still have the muscle memory to do it, she says.

It can be adjusted for anyone between 5’2″ and 6’4″ tall and up to 220 pounds, according to Berkeley Bionics. Users can attach and remove the legs within a couple minutes. The system will be shipped to “select” rehabilitation facilities early next year so more patients can start using it.