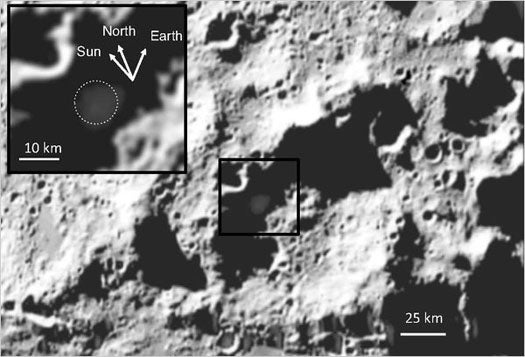 When NASA “bombed” the moon back in October there was a lot of fanfare leading up to a visually anticlimactic live Webcast of the event. But a series of papers publishing tomorrow in Science pack some data that make up for the less-than-exciting event. Data collected by the moon-bombing LCROSS mission and the orbiting Lunar Reconnaissance Orbiter show the dark corners of the lunar south pole harbor more water than some arid regions on Earth.

By astronomical standards, that’s huge. For a long time many scientists thought the moon was completely dry. But it turns out the soil at the bottom of the Cabeus crater is composed of about 5.6 percent water ice and could hold as much as 8.5 percent in places. By comparison, the Sahara Desert sands hold just 2-5 percent water.

The greater meaning behind all of this, of course, is that there is a potential source of water on the moon, and that removes a huge technical obstacle when you start thinking about things like permanently manned moon bases or waypoints for future trips into deep space. And abundant water – relative to expectations, anyhow – isn’t the only thing LCROSS found in the Cabeus crater. Analysis of the plume from the moon bombing showed the presence of hydrogen, carbon monoxide, mercury, calcium, and magnesium.

Those elements might not be abundant across the moon – judging from some of the materials found, Cabeus could be a comet impact site – but it is certainly heartening to know that there are potential resources there that could be exploited for long-term living in space. And, of course, the most important of those is the water, which is what LCROSS went looking for in the first place.

Water on the moon isn’t just potentially drinkable. It could be harvested to grow plants in a future self-sustaining moon base, split into hydrogen and oxygen to power a generator for such a habitable environment, or likewise be used to create fuel for rockets, either to return to Earth or to top off the tanks for a mission beyond the moon. The NASA authorization bill that was just signed into law by President Obama shifts NASA’s research emphasis from the moon to Mars, but it might just turn out that you can use one to get to the other.