Illicit use of TV signals is not only bad for the entertainment industry. It’s apparently bad for climate research, too.... 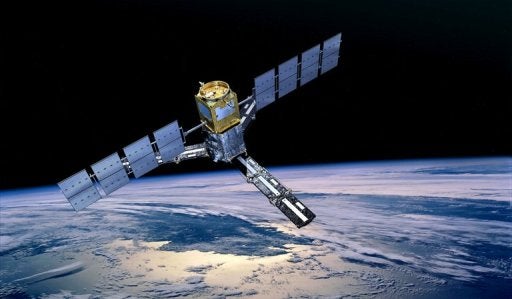 Illicit use of TV signals is not only bad for the entertainment industry. It’s apparently bad for climate research, too.

The European Space Agency is trying to shut down illegal radio and TV transmissions that have been interfering with one of its climate satellites, officials said today. Apparently some TV, radio links and even security networks are transmitting signals where they are not supposed to be, messing with the satellite’s sensitive measurements. And the satellite itself helped pinpoint the scofflaws.

Soon after the $434 million Soil Moisture and Ocean Salinity mission launched last fall, scientists noticed contamination in its data. The satellite carries a passive radiometer that captures the microwave radiation emanating from the Earth’s surface. This corresponds to the amount of moisture in soil and salinity in the ocean, according to ESA. Moisture and salinity data can improve scientists’ understanding of Earth’s water cycle.

But when scientists started looking at the data overlaid onto a map, they saw dark spots of fuzz, indicating radio frequency interference. At times, it effectively blinded the satellite, ESA said.

The problem has to do with how radio frequencies are assigned. The International Telecommunications Union reserves a special radio band in the 1400-1427 MHz range, called the L-band, especially for Earth-observing satellites and space astronomy. But some too-powerful radio transmitters encroached on the ESA’s frequency. Making matters worse, some TV and radio transmitters were illegally using that radio band.

SMOS was not the ESA’s only incommunicado satellite this summer — its sister, the Gravity field and steady-state Ocean Circulation Explorer (GOCE), was unable to send data back to Earth because of a faulty communications link. ESA announced Sept. 7 that it had been fixed, however.

SMOS can pinpoint the source of the illegal transmissions to within a few miles, so the space agency has been asking European governments to track down the errant transmitters. In most cases, transmitters can simply be re-tuned, but some are being shut off entirely. Thanks to the crackdown, things are starting to improve, ESA said.

“While the cooperation between ESA and governmental authorities continues to be fruitful, the hope is that these cases will lead to tighter regulation enforcement,” the agency said.