If it’s not the most efficient piece of clothing ever designed, it very well might be the smartest. The ‘DARPA... 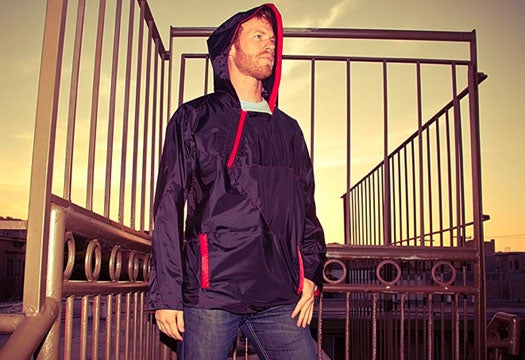 If it’s not the most efficient piece of clothing ever designed, it very well might be the smartest. The ‘DARPA hoodie,’ a strangely-designed patchwork garment accented with the occasional red zipper, is made of 12 interlocking pieces of rip-resistant nylon that sew perfectly together into a hoodie with zero waste. Cooler still, it was born of an algorithm developed for DARPA’s Programmable Matter program, which seeks to make T-1000-like shape-shifting smart materials. How’s that for fashion meeting function?

Programmable Matter aims to create materials that can change shape on command to form anything the user needs, like a spare part or a robot assassin. San Francisco-based engineering firm Otherlab – run by two former MIT scientists – snared some of the research money doled out by DARPA as part of the program. With part of their grant they went to work designing software algorithms that represent shapes in three dimensions flat, 2-D component panels.

Using that algorithm, they decided to explore how the technology could be applied to clothing and textiles. They used the software to render a 3-D model of an average 6-foot man, then used it to create a pattern of flat panels that make up that shape. The software determined it could do this most efficiently with a dozen irregularly shaped panels that interlock into the precise 3-D shape of a hoodie.

Perhaps more unbelievably, this piece of military computer science turned textile is actually pretty sharp. Stylish enough, in fact, that Betabrand – the clothing designer that actually produced the hoodie – has sold between 50 and 60 of the limited run of 100 that went on sale last week. As of this posting, it appears you can still buy one for $110 from Betabrand, though we’re waiting for the next-gen version that will actually control the weather rather than just protect you from it.