New DARPA-funded research could revolutionize portable power supplies, leading to lithium-ion batteries that are smaller than a grain of salt.... 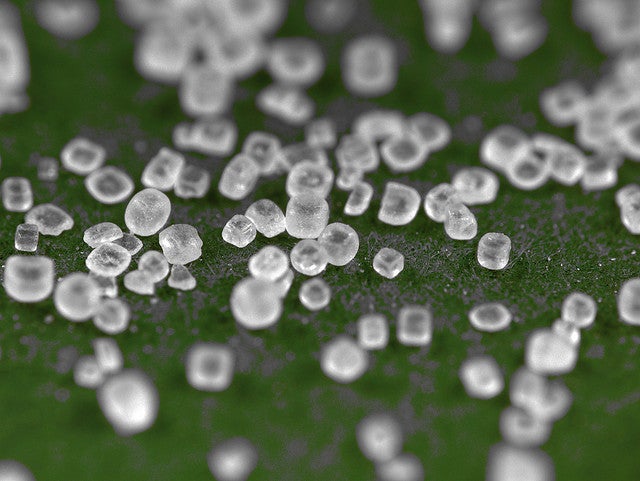 New DARPA-funded research could revolutionize portable power supplies, leading to lithium-ion batteries that are smaller than a grain of salt.

Jane Chang, an engineer at the University of California-Los Angeles, is designing a tiny solid electrolyte that allows charge to flow between two nanoscale electrodes. Eventually, the wee batteries could be used to power a host of micro and nanodevices.

The special electrolyte is basically just a series of nanowires coated with conductive material. Chang is using painstakingly slow atomic layer deposition to spray minuscule amounts of lithium aluminosilicate onto the nanowires. The solid compound allows current to flow within a battery. The nanowires are designed to have a high surface-to-volume ratio, making them more efficient.

“We’re trying to achieve the same power densities, the same energy densities, as traditional lithium ion batteries, but we need to make the footprint much smaller,” Chang says.

Nanoscale electrodes are being designed in other labs, but so far, no one has built a complete working nano-battery, according to UCLA.

If they work, they could be more effective, and perhaps less prone to scary malfunction, than nuclear microbatteries or virus-powered batteries. The batteries could be useful for powering devices for medical diagnostics and treatment, among other technologies.