Despite several setbacks — and some troubling news from the FAA this week — Boeing is plugging along with tests... 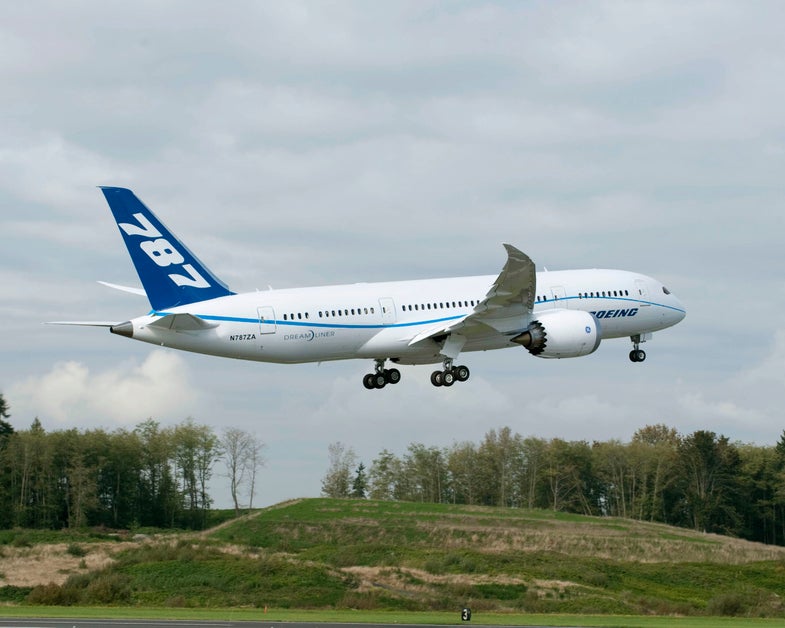 Despite several setbacks — and some troubling news from the FAA this week — Boeing is plugging along with tests on its super-sized 787 Dreamliner. The aerospace giant added a sixth and final plane to its test fleet this week and recently performed a particularly strange takeoff maneuver that involves dragging the plane’s tail on the ground.

Boeing’s test team completed several flight test milestones in recent weeks, including icing tests; flight loads survey testing, which demonstrates the pressure distribution on the plane during different phases of flight; brake testing; and crosswind, takeoff and landing tests. One test even involved landing on a runway soaked with 50,000 gallons of water. Check out the video montage below.

The tail-dragging test was meant to determine the lowest airspeed needed for the Dreamliner to take off. This is called the velocity minimum unstick, or VMU. Boeing pilots tested out the new plane’s chops at Edwards Air Force Base in California, Boeing Field in Seattle and an airfield in Iceland.

Meanwhile, Boeing learned this week that when the 787 is finally in the air, all other airplanes had better seek a wide berth. The Federal Aviation Administration issued an interim requirement that planes landing after the 787 or Boeing’s new 747-8 jumbo jet must stay at least 10 miles behind.

It’s to protect other planes from wake turbulence, a disruptive vortex that forms at the wingtips of big planes and swirls behind them. As of now, heavy jets must hang out 4 miles behind other large airplanes, including the 747-400 now in service, the Seattle Times reports. Light aircraft have to stay 6 miles back.

The FAA requirement is not final, and officials acknowledged it was a conservative estimate, so the distance will likely drop. But a minimum safe distance of more than 4 to 6 miles could be a huge problem for airlines flying big jets behind the 787. Airlines and airports already perform complex choreography to land as many planes as quickly as possible at congested airports. Disrupting those careful patterns will cause inevitable delays. A Boeing spokeswoman said the firm is discussing the ruling with the FAA.

Federal officials consulted with the International Civil Air Organization, which studied the wake vortices of the enormous Airbus 380-800, the Seattle Times said. Initially, the group recommended a 10-mile separation, but later relaxed that to between 6 and 8 miles.

Wake turbulence is a dangerous problem, especially at congested airports. Initially, investigators thought wake turbulence was responsible for the crash of American Airlines Flight 587 in November 2001. The Airbus A300 took off moments after a Boeing 747 on the same runway. Ultimately, the National Transportation Safety Board ruled that the first officer overreacted to the 747’s wake turbulence, and the plane’s vertical stabilizer snapped off, causing the crash.

Boeing expects to complete flight tests on the Dreamliner in time for its first delivery in mid-February, to All Nippon Airways.