Even the Army seems scared of this one 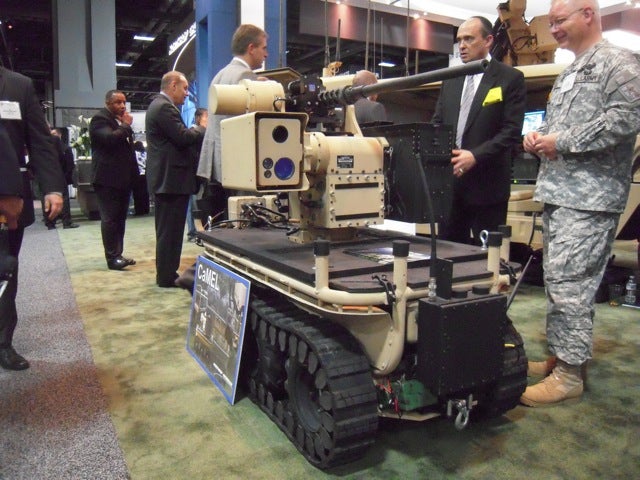 Northrop’s heavy-duty hauler CaMEL has been a success, scoring contracts from Israel and serious interest from the U.S. Army. But why haul miscellaneous stuff when you can haul a giant gun instead?

The hauler is named the Carry-all Mechanized Equipment Landrover–yeah, that spells out CaMEL. It’s a 60-inch-tall treaded vehicle capable of carrying an impressive 1,200 pounds of stuff, and its usefulness in the field is proven by its popularity. Israel has bought more than 60 of them, and the U.S. Army is looking into its possibilities as well.

But Northrop, with no particular urging from the market, has decided that the CaMEL would be much cooler with a massive .50 caliber M2 machine gun mounted on top. It’s controlled remotely by a touchscreen, just like its slightly-less-violent hauling brother, and actually uses a hybrid engine (“Just like a Toyota Prius,” says the Northrop rep).

Shown off at an Army conference, the gun-toting CaMEL wasn’t built to spec for any organization–in fact, the U.S. Army seems downright scared of using armed robots. Back in October of 2009, the Army pulled the armed-robot SWORDS program after one of the robots behaved in an unsafe manner. Nobody was hurt, but it’s made the Army very skittish about getting in bed with these kinds of machines. Northrop mostly built the armed CaMEL to attract visitors to their booth, and probably for fun as well. But it might have the result of gently encouraging the Army to take a second look at armed ‘bots–hopefully they’re more reliable than certain lying robots.