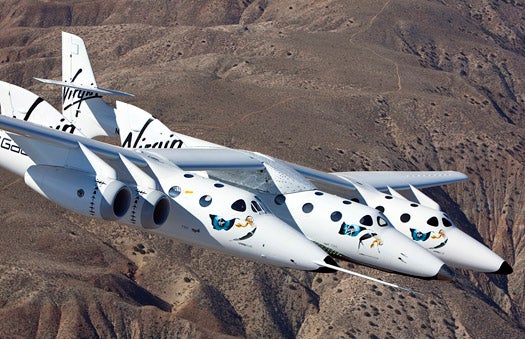 The first "captive carry" and flight of VSS Enterprise or SpaceShip II over Mojave, California Monday March 22,2010. The center mounted spaceship is attached to the "mothership" WhiteKnight II for a series of flight tests prior to its first drop test later in the year. Photographer:Mark Greenberg
SHARE

Last week we celebrated the dedication of Spaceport America, New Mexico’s dedicated private spaceflight hub that hopes to begin launching regular flights to the edge of space sometime next year. This week we hear the other side of the story: space tourism’s emissions of black carbon in the upper atmosphere could have dire consequences for climate change, increasing polar temperatures by 1.8 degrees and reducing polar sea ice by 5-15 percent.

A paper publishing in Geophysical Research Letters suggests that emissions from 1,000 private rocket launches each year would dump detrimental amounts of black carbon – the really bad kind – into the stratosphere where it could remain for up to a decade, altering global atmospheric conditions and the distribution of ozone. And because there’s no weather up there to scrub the carbon away as it does commercial airline emissions, that black carbon could hang around for a while.

The 3-D models employed ran scenarios of black carbon emissions over Las Cruces, New Mexico, itself, home of Spaceport America (and Virgin Galactic’s space tourism headquarters). The models showed that all those firing rockets – 1,000 over the course of a year – would leave behind some 660 tons of black carbon annually, comparable to the emissions of the entire global aviation industry.

Why? Commercial rockets don’t burn conventional jet fuel, but rather a mixture of kerosene and liquid oxygen. Some, like Virgin’s SpaceShipTwo, use a hybrid rocket that fires a synthetic hydrocarbon blended with nitrous oxide. These hybrids are more economical but they emit more black carbon. Black carbon is a ready absorber of sunlight, which leads it to heat the atmosphere wherever it can be found in concentrated quantities.

The authors readily admit their research is preliminary and that they do not have all the data they would’ve liked; for instance, they did not have precise measurement on how much black carbon Virgin’s rocket emits in a given flight. But those preliminary findings don’t bode well for an industry that’s just learning how to get people safely to suborbital highs. If carriers were required to cut their emissions they might not be able to produce enough power to get to those altitudes, and that would quite clearly be a major setback for the entire space tourism industry.