Bilingual Roboreceptionist is Eager to Address Your Cross-Cultural Needs

Need help with something? Your roboreceptionist is here to assist you. Researchers at the U. of Arizona and Carnegie Mellon... 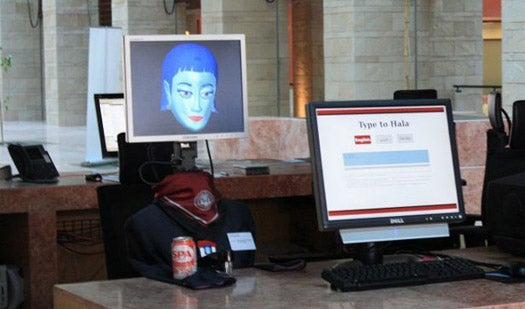 University of Arizona College of Social and Behavioral Sciences
SHARE

Need help with something? Your roboreceptionist is here to assist you. Researchers at the U. of Arizona and Carnegie Mellon University are developing a robot receptionist that is more than just a pre-programmed phone answering system. “Hala,” the prototype roboreceptionist at Carnegie Mellon’s Qatar outpost, is a bicultural, bilingual robotic interface that interacts with visitors based on each person’s linguistic preference and cultural customs.

Hala currently switches between English and Arabic to accommodate the person she is communicating with, but researchers are working to make her constantly active in both languages while simultaneously comprehending cultural sensibilities and linguistic cues to determine how best to deal with each individual person. For instance, say a person raised in Qatar chooses to address Hala in English; the roboreceptionist is designed to pick up the cultural conveyance of the person’s speech and respond with similar semantics and Arabic cultural idioms even though the conversation is in English.

That may sound like political correctness taken to an extreme, but it’s actually important for effective communication. For instance, as University of Arizona linguistics and computer science associate professor Sandiway Fong points out, Americans tend to get greetings out of the way quickly and get right down to business. In Arab cultures, the exchange of pleasantries is often drawn out and a quick leap to the heart of the matter could be perceived as rude. There are also many idioms that mean one thing in English but mean something slightly different in Arabic custom. Hala will know the difference and respond appropriately to minimize misunderstandings.

This differs from most language translating software systems, which are usually trained on natural language skills using news text. This teaches them a wide variety of words and grammatical structures but leaves them lacking practical things like proper greetings or popular turns of phrase. Hala’s creators are working to expand her linguistic purview so the robot doesn’t just speak two languages, but converses comfortably and naturally in them.

Fong and company see future robots like Hala working as intermediaries between cultures, spanning the communication gap that often separates two people of different backgrounds. A three-year, $1 million grant form the Qatar National Research Foundation will help them get there. You can see Hala in action here.

[University of Arizona via PhysOrg]