Attention, Supervillains and Climate Engineers: The U.N. May Soon Forbid You To Block Out the Sun

Of all of C. Montgomery Burns’s nefarious dealings on The Simpsons, perhaps none sticks in the public consciousness like the... 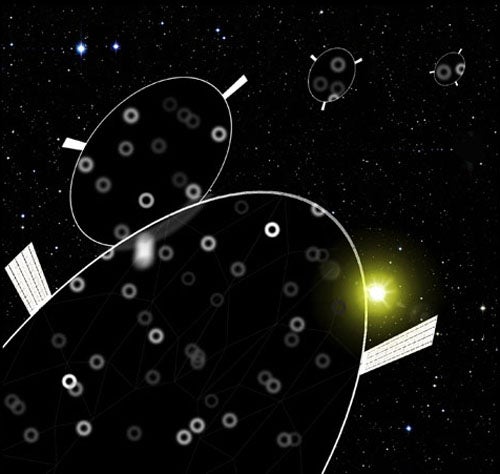 ** ADVANCE FOR FRIDAY MARCH 16 AND THEREAFTER ** This graphic illustration provided by Roger Angel of the University of Arizona shows a sunshade or solar umbrella composed of small discs designed reduce global warming. With a $70,000 NASA grant, the top University of Arizona astronomer has come up with an idea to launch 16 trillion small "flyers" or discs. They would form a cloud between Earth and sun and reduce sun rays by about 1 to 2 percent. The cost? At least $4 trillion. (AP Photo/Illustration by Roger Angel/Tom Connors, Steward Observatory, University of Arizona) ** MANDATORY CREDIT NO SALES **.
SHARE

Of all of C. Montgomery Burns’s nefarious dealings on The Simpsons, perhaps none sticks in the public consciousness like the time he attempted to use a massive shade to block out the sun (most notably because doing so led to his being shot by a vigilante baby and an uncharacteristic two-episode event). But the U.N. may soon put all such plans to blot out the sun – villainous or otherwise – on hold.

The U.N. convention could choose to take up this topic – no joke – during the tenth meeting of the Conference of the Parties to the Convention on Biological Diversity going on until the end of this month in Nagoya, Japan. It might sound a bit sci-fi, but some in the scientific community have advocated reducing the amount of sunlight reaching earth to slow the effects of global warming.

Doing so requires launching some kind of medium into space to deflect the suns rays. Some schemes call for placing a large lens or something like it out at the Lagrange point between Earth and the sun to deflect a small percentage of the sun’s radiation away. Others call for placing many billions or trillions of tiny objects between us and the sun. All are estimated to be very expensive and it’s not at all certain that any of these ideas would work. But they have been seriously considered; even NASA and other reputable space organizations have looked at the idea, even if only to keep an open mind.

But the U.N.’s interest stems from the fact that if it’s unclear whether a shading scheme would even be effective, it’s even more unclear what the ramifications would be if one was. Such an experiment could have unforeseen effects on climate and ecosystems back on Earth, and that could cause problems ranging from drought and famine to extreme weather systems or even, in extreme cases, extinction of some species (hopefully not us).

Regardless, it appears the U.N. aims to look into banning sunshades or at least limit research into them, choosing instead to face the global warming crisis with solutions here on Earth. Bond villains and unscrupulous cartoon energy magnates, take note.