Remember the flipperbots? We first saw them this summer, when York University engineers showed off their new underwater robot controller.... 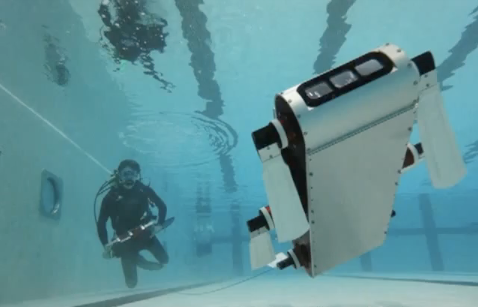 Remember the flipperbots? We first saw them this summer, when York University engineers showed off their new underwater robot controller. Now New Scientist has some great new video of our flippered friends.

The Aqua robots can be used in hard-to-reach spots like coral reefs, shipwrecks or caves. Though the diver remains at at a safe distance, he can see everything the robot sees. Check out this robot’s-eye-view of a swimming pool.

Aqua robots are controlled by tablet computers encased in a waterproof shell. Motion sensors can tell how the waterproofed computer is tilted, and the robot moves in the same direction, New Scientist reports.

As we wrote earlier this summer, tablet-controlled robots working in concert with human divers would be much easier to command than undersea robots controlled from a ship. Plus, they just look so cute.