Hitachi’s “Intelligent Carry” isn’t humanoid, doesn’t build moon bases, and has, as far as we know, limited cooking skills. Rather,... 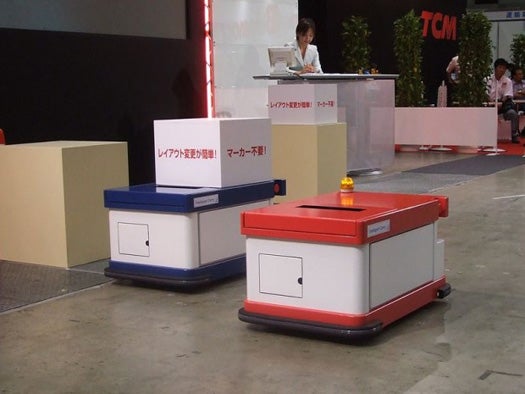 Hitachi’s “Intelligent Carry” isn’t humanoid, doesn’t build moon bases, and has, as far as we know, limited cooking skills. Rather, it’s something so many robots are not: surprisingly practical. The boxy ‘bot autonomously moves around a space without human help, carrying and delivering whatever to wherever.

To get around a space, Intelligent Carry relies upon an algorithm called SLAM (Simultaneous Localization and Mapping) and a precision laser sensor to measure up its environment, detect boundaries, and ensure it doesn’t run into anything. It can them move about, moving objects for place to place in a factory or office.

It’s somewhat limited in range – Hitachi says it works best within a 100 foot radius – so it won’t yet navigate an entire warehouse. But what it lacks in distance it makes up for in strength, as larger versions can haul up to 2,200 pounds. It also hums along at a decent tick, maxing out at around 4.5 miles per hour.

The smaller versions of Intelligent Carry don’t haul as much cargo, but man, are they ever cute.