Undergrads at Colorado Crash a NASA Satellite Into The Ocean

Call it a crash course. A group of undergrads at the University of Colorado at Boulder got to participate in... 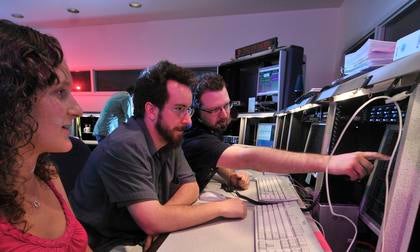 Call it a crash course. A group of undergrads at the University of Colorado at Boulder got to participate in an unusual and awesome classroom activity on Monday, the culmination of a weeks-long process to decommission a NASA science satellite: they crashed a satellite into the atmosphere, sending it to a fiery death.

The Ice, Cloud, and Land Elevation Satellite (ICESat) spent seven years aloft under the careful guidance of professionals and their undergrad protégés at CU-Boulder’s Laboratory for Atmospheric and Space Physics (LASP). The satellite gathered key data on polar ice, ice sheets and sea ice dynamics that have informed nearly a decade of climate research, but on Monday — low on fuel and out of time — ICESat’s number was up.

But it wasn’t all explosions in the sky. Decommissioning the satellite was a process that required the undergrads to spend seven days a week calculating positions, plotting re-entry scenarios, and ensuring that whatever debris did survive re-entry landed somewhere where it wouldn’t do any damage.

That location happened to be the Barents Sea north of Norway and Russia, and no more than 200 pounds of ICESat’s original 2,000-pound mass was expected to survive re-entry. The team of undergrads and LASP professionals used the last of ICESat’s fuel to put it on course for a spectacular death, and on Monday the satellite re-entered the atmosphere and largely burned up.

Such an honor is rare, particularly for undergraduate students. The last decommissioning-by-fire of a NASA satellite occurred in 2002 and was conducted by NASA personnel. That just might qualify them for inclusion in our guide to the 30 coolest college classes in the country.