When civilizations were first spreading out across the Earth from its place of origin, traders and travelers harnessed the wind... 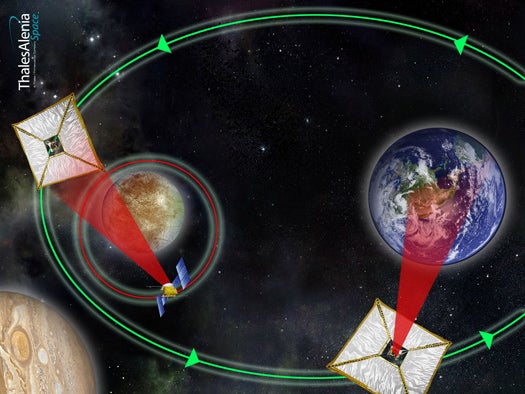 When civilizations were first spreading out across the Earth from its place of origin, traders and travelers harnessed the wind to circulate people, goods, and information from locale to locale, keeping the wheels of exchange turning as efficiently as technology would allow. Now, space sailing may take on a similar role. Fleets of “data clippers” could soon circulate around the solar system, ferrying scientific data from deep space missions back to Earth.

Higher-resolution imaging technology and space-rated flash memory will soon permit deep-space scientific missions to map planets and moons in faraway corners of the solar system in unprecedented detail. But all that data would take decades to download back to Earth from so far away. What’s needed is a means to physically grab all that data and send it back to Earth via a separate vehicle.

Today at the European Planetary Science Congress in Rome, representatives of Thales Alenia Space outlined a plan to create just such a network of solar-sail propelled spacecraft that make huge laps around the universe, swinging close enough to deep space missions to quickly download their data then making a return pass by Earth to dump the data to receivers below. Once the download is complete, the maneuverable data clipper could head back out to deep space to pick up more data.

Of course, a single clipper would take a painfully long time to make a complete lap to, say, Saturn and back. But a fleet of data clippers constantly swarming the solar system could provide a means to move data around the solar system much like European Galleons moved goods in a circle (it was really more of a triangle) around the Atlantic a few centuries ago.

This all relies on solar sail technology coming along at a pace that makes it a sustainable propulsion system for spacecraft. But with Japan’s IKAROS already sailing its way across the solar system and several other space agencies working on their own space sail tech, Thales Alenia’s team thinks data clippers could be sailing the solar trade winds by the late 2020s.