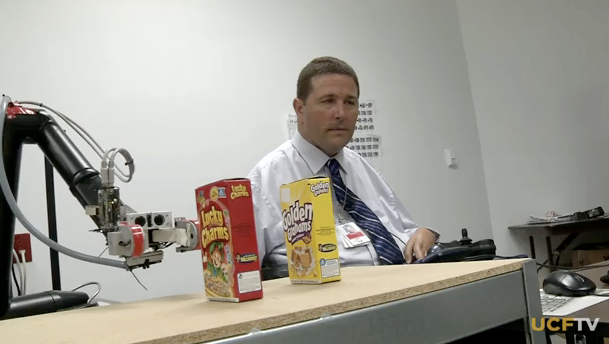 A new robotic arm system designed to help people in wheelchairs is apparently too easy to use, frustrating paraplegics who are used to thinking several steps ahead when they use technology.

University of Central Florida researchers said they thought users would like their computer program’s automatic mode, which involves sensors mounted on a robotic arm. But testers preferred the manual mode, which requires typing or saying precise commands — even though they did not perform tasks as well, the researchers said.

Still, a fully automated robotic arm could help patients who have very limited or no movement, the researchers say.

Using a touch screen, trackball mouse, joystick or voice command, a wheelchair-bound patient can activate the robotic arm to grab something. Sensors on the arm locate the object and algorithms determine how the arm should be moved in order to grab it.

The computer talks to the patient, providing updates on what it’s doing: “I will bring the item to you now.” In this video, the arm is shown gripping boxes of cereal and delivering them to Bob Melia, a quadriplegic who advised the UCF team.

Melia brought volunteers to test the new equipment, which he said would help people with little or no mobility to live more independently. But most participants thought it was too easy, so Aman Behal, an assistant professor of engineering at UCF, said the next step is to make the arm more interactive, giving patients more to think about while they’re using it.

Researchers are always developing new gadgets to improve life for quadriplegics, patients with “locked-in” syndrome and others who can’t communicate or who have limited mobility.

But they have to balance challenge and capacity, which is described by the theory of flow, according to John Bricout, Behal’s collaborator and the associate dean for Research and Community Outreach at the University of Texas at Arlington School of Social Work. “If we’re too challenged, we get angry and frustrated. But if we aren’t challenged enough, we get bored,” he said.