The XOS Exoskeleton, which was first shown off about two and a half years ago, was the first full-body suit... 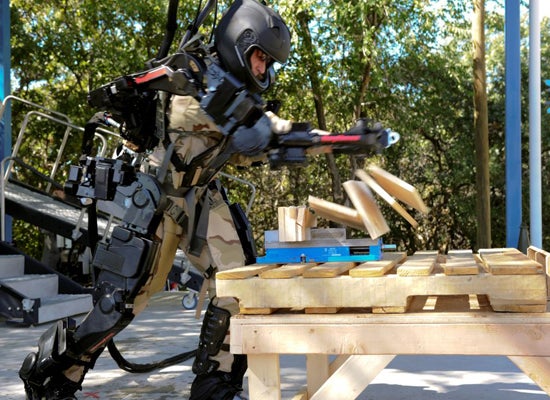 The XOS Exoskeleton, which was first shown off about two and a half years ago, was the first full-body suit that really evoked the sci-fi and comic fan’s dream of donning a suit that grants superhuman strength. Late last week, Raytheon-Sarcos demonstrated the newest XOS suit–the sequel, you might say.

Not so coincidentally, Paramount Pictures was on hand to talk about the suit’s connections to Iron Man 2, which comes out on DVD/Blu-ray this week. But unlike Iron Man 2, which was all about more (more villains! More length! More plotlines!), the XOS-2 is all about less: Less energy required, less heavy, and less muscle required to lift objects.

Most importantly, the ratio between actual and perceived weight lifted is much improved, going from 6:1 in the XOS-1 to a whopping 17:1 in the XOS-2. A 50-pound weight feels like only three pounds, and a 200-pound weight feels like only 12. Test engineer Rex Jameson (that name even sounds like a superhero, doesn’t it?) was able to punch through four one-inch boards strapped together, and repeatedly lifted a 200-pound artillery shell.

But the suit also requires 50 percent less energy, a major upgrade, and weighs about 10 percent less, at 195 pounds, which should come in handy in the suit’s most likely future applications, especially military and construction. The suit allows for faster, more precise, and more portable moving of heavy objects than a large machine, allowing a worker to pick up and move heavy objects all day without fatigue. One suited worker, says Raytheon-Sarcos, can do the work of two to three non-suited workers.

Though the suit weighs 195 pounds, Jameson says it feels extremely lightweight, almost like a winter jacket.

The XOS-2’s practical applications are obvious, but its funding is not. The project has received $4 to $8 million a year from DARPA, but the government hasn’t approved funding through other channels quite yet.