Please, Don’t Let This Be the Future of Air Travel 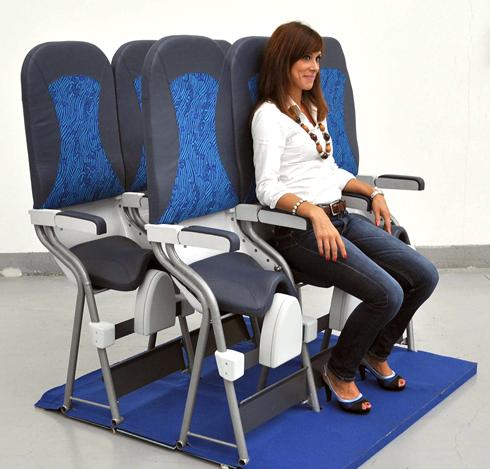 On your last flight, did you stare with envy at the people sitting in the exit row? Did you get a charley horse from trying to cross your legs under your tray table? Consider yourself lucky, pal. Your next budget flight might ask you to fly horseback style, squeezed onto a saddle in just 23 inches of space.

This new airplane seat will be officially unveiled at a trade show next week, and the early buzz is that several airlines are interested, including some in the U.S. The thought makes us cringe — which, come to think of it, we will be required to do in order to fit into these seats.

The “SkyRider” is the latest innovation designed to save airlines money and, apparently, make passengers miserable. It is supposed to mimic the experience of riding horseback: “Cowboys ride eight hours on their horses during the day and still feel comfortable in the saddle,” says Dominique Menoud, director general of Aviointeriors Group, which will make the seats. Some cowboys might say otherwise, but there’s a larger point: In the future, do we really want to return to traveling Old West style?

Odds are pretty good that budget airlines will be the first to order the SkyRider, which Menoud says can be used in its own cabin class. Ireland’s Ryanair already wants to sell standing-room-only seats, and this could be an aviation-authority-approved alternative. Tickets will probably be cheaper, but airlines will reap rewards by packing more people on board. That is, until people give up and choose telepresence over sardine-style travel.

We’re all for future aircraft technologies that improve flight efficiency and design. By all means, give us airplanes with self-cleaning, shape-changing seats made of plant fibers. Please, just don’t make us sit 23 inches apart.