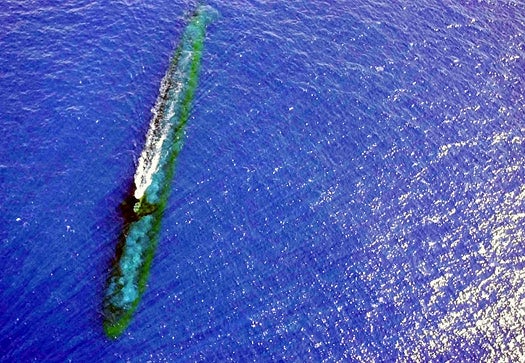 Under the plan, a fleet of about 20 subs would dive some 100 feet below the surface just in front of an approaching storm. Each submarine would be fitted with eight pumps capable of quickly dumping more than 500 tons of chilled water per minute into the water above. According to Ise Kogyo, the company behind the idea, 20 submarines could quickly lower the temperature of more than 600,000 square feet of water to the point that a storm’s strength would be diminished.

A typhoon needs water temperatures of between about 77 to around 82 degrees to form and gather steam. Cooling the water in the path of a storm could slow its rotation or even stop a gathering storm in its tracks. In theory, anyhow. A patent application is pending and the scheme may soon be approved in the U.S., though cooling the water may be the least of the problems associated with the idea. For it to work, you first have to predict the path of a storm, then get the submarines in place before the storm can change course.

That’s a lot of variables, but it might be easier than setting off a series of sonic booms in the eye of the storm. As weather manipulation schemes are concerned, it might be one of the more reasonable ones we’ve seen.