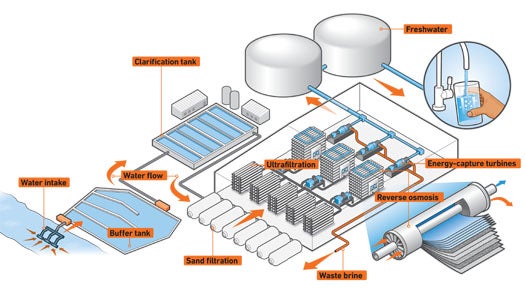 By 2025, the United Nations reports, two out of three people on Earth will live in places without enough freshwater to drink or grow crops. One way to beat that trend is to extract water from saltwater. The most common method of doing that is reverse osmosis, an energy-intensive process. To reduce that energy burden, researchers are developing other methods to desalinate water, such as using biomimetic membranes. Some proposed desalination plants will reduce their energy needs by using energy-capture schemes or sustainable energy sources like wind power. Here’s how one state-of-the-art plant—the Thames Gateway Water Treatment Works, which opened this June in Beckton, East London—processes 39 million gallons of water every day.

A Peek Inside the Plant

REVERSE OSMOSIS
Most desalination plants take advantage of reverse osmosis to filter salt from water. Pumps force salty water through a sheet of polyamide wound around a giant cylinder. Water molecules squeeze between the individual polyamide chains to pass to the membrane’s far side. The dissolved salt can’t pass between the polymer chains, so it stays behind. The Beckton plant uses a unique four-stage reverse-osmosis process (most plants use just one or two), running the brackish water through four sets of membranes, each step of which generates more freshwater out of the salty Thames water. In a two-step process, only 50 percent of the source water becomes drinkable. The engineers say the Beckton plant’s process will convert 85 percent of river water to freshwater.

ENERGY-RECOVERY DEVICES
The 15 percent that remains, now a briny concentrate, is still under pressure, and that pressure can be recaptured. The brine spins a turbine in the plant’s energy-recovery devices. This turbine runs a pump that boosts the pressure of the next batch of seawater moving through the system. Tom Pankratz, the editor of Water Desalination Report, estimates that since energy-recovery devices were introduced 15 years ago, they have sliced the amount of energy required to produce freshwater in half, from 30 kilowatt-hours per 1,000 gallons to less than 15 kilowatt-hours

TIDAL EXPLOITATION
The more salt there is in the water, the more it costs to get it out, so Beckton plant engineers adjust their approach depending on the tide. They collect the estuary water in huge tanks in the hours leading up to the low tide, so they get river water with a concentration of less than one third that of normal seawater. When the tide starts rolling in and the salinity starts increasing, the tanks’ pumps
shut down.

WASTE TREATMENT
The Beckton plant coordinates with its neighbor, a large sewage-treatment plant. Treated effluent from the sewage plant is blended with the briny concentrate—an environmental hazard—and diluted, making the discharge less salty than the river.

HOW MANY DESALINATION PLANTS ARE THERE IN THE U.S.?
About 250, each of which has the capacity to generate greater than 0.025 million gallons a day. Almost half of them are in Florida, with dozens of plants in California and Texas.

Forward osmosis: Osmosis is the process in which water moves from an area of low solute concentration (such as salt or sugar) through a membrane to an area of high concentration. In one system, patented by Massachusetts company Oasys, a membrane separates saltwater from a highly concentrated solution of ammonia salts. The water molecules migrate from the saltwater into a solution of ammonia salts. To generate freshwater, the ammonia is removed from the water by low-grade heat. This process requires less energy than reverse osmosis.

Biomimetic membranes: Channels of proteins called aquaporins embedded in a polymer membrane filter freshwater from saltwater, much like a kidney recovers water from urine. (In fact, multiple kinds of aquaporins are found in kidneys.) The aquaporin proteins preferentially draw the water molecules through the membrane.