We are not at war with an alien race from the center of the Milky Way, but if we were,... 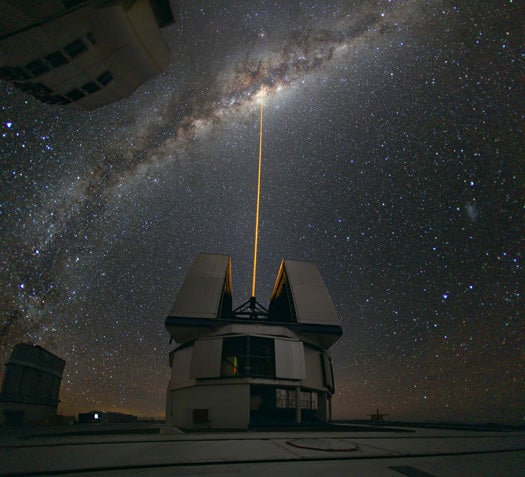 We are not at war with an alien race from the center of the Milky Way, but if we were, this is exactly what we would want it to look like. Snapped at the European Southern Observatory’s Paranal Observatory — home of the Very Large Telescope (VLT) array — the photo depicts the VLT’s Laser Guide Star facility in action.

The laser beam is part of the VLT’s adaptive optics system, which corrects for distortions caused by Earth’s atmosphere so the land-based optics system can get clear shots of the cosmos. In this case, the color of the laser is precisely tuned to excite a band of sodium atoms found in an upper layer of the atmosphere some 56 miles up. Those glowing atoms create a kind of synthetic reference star in the upper atmosphere that the VLT can use to calibrate itself.

The image above was snapped by the ESO’s photo ambassador Yuri Beletsky in mid-August, as astronomers prepared to peer deep into the Milky Way’s center to observe the supermassive black hole that resides there.